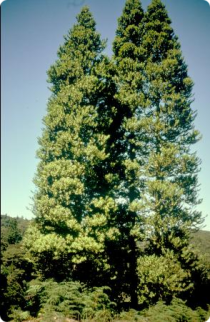 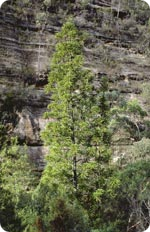 The Monkey Puzzle is the only reliably hardly member of a remarkable family of ancient conifers – the Araucariaceae. The evolution of the family predates the Dinosaurs dating back to the Triassic Era.

The family was widespread during the heyday of the Dinosaurs during the subsequent Jurassic and Cretaceous Eras. The evolution of broadleaf trees and a changing environment lead to the disappearance of the family from the northern hemisphere at the end of the Cretaceous.

Fossil remains of Araucarias have been found in areas as diverse as Britain, North America and Japan.

The surviving species are subdivided into 3 genera:

This consists of 19 species, including the Monkey Puzzle. Other important species are Araucaria angustifolia – The Parana Pine used in furniture manufacture and Araucaria heterophylla – The Norfolk Island Pine, a popular ornamental in warmer areas and as a pot plant when young. The group are all found in the Southern Hemisphere in South America, Australia, New Guinea, Norfolk Island and New Caledonia.

This consists of roughly 21 species, although controversy surrounds the naming of species here. Agathis is a tropical genera found in Malaya, Indonesia, the Philippines, New Caledonia, Australia and New Zealand. New Caledonia is particularly rich in species. The island was once part of eastern Australia but detached over 80 million years ago carrying a precious cargo of ancient conifers with it. The most well known is the large Agathis Australis of New Zealand, the Kauri Pine. The tree's excellent timber lead to its exploitation first by the Maoris and later more destructively by Europeans.

This genera is in many ways the most remarkable, it consists of only one species, The Wollemi Pine – Wollemia Nobilis. This genus until 1994 was only known from fossil evidence, believed long extinct. In that year a grove of approximately 40 adult trees and 200 seedlings was discovered in a gorge in the Wollemi National Park in the Blue Mountains in Australia. Similar fossil finds from Australia and New Zealand date back to the late Cretaceous. The Australian government has instituted an extensive protection and propagation effort for this beautiful and intriguing tree.

Previous - West Himalayan Spruce
Back to