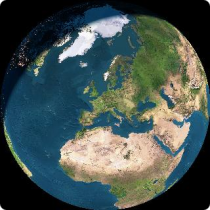 Satelite map of Africa and Europe

Satelite map of Africa and Europe

Ireland lost its land connections to Europe early at the end of the last Ice Age. The result is that compared to Europe and even Britain, Ireland has an impoverished tree flora. We only have three indigenous conifers, Yew, Juniper and Scots Pine. The Scots Pine probably became extinct in historical times. However well into Elizabethan times, Ireland was well forested. However from then on heavy felling, a rapid rise in population, uneven land distribution and a change to a wetter climate meant that by this century, only Iceland has a lower tree cover than Ireland in Europe.

The introduction of exotic flora started in Ireland as soon as humans came to Ireland. Both crop species and weeds arrived with the first settlers. Many arrivals did not survive, climatic and ecological constraints always limited what would and would not grow. Gardeners by their nature always attempted to stretch these limits. Areas with a similar temperate climate would always provide the bulk of successful introductions. Ireland having a mild moist oceanic climate would provide adaptable to many species. However our late frosts and mild winters would and do cause problems for trees from more continental climates.

As in Britain, the large landed estates were to become refuges for trees. From Georgian times, a trend towards contrived but naturalistic planted landscapes meant that large trees were required for such use. Native species like Oak and Lime were used but augmented by introductions from Britain and Europe. Many of these species were so long in Ireland that they were seen as native. Beech is a typical example. Other trees that had arrived from Europe included Silver Fir, Spanish chestnut and Horse chestnut. The large conifer most used in these landscapes was the Cedar of Lebanon. These species would provide the framework for the first naturalistic style garden in Woodstock.

Previous - The Woodstock Arboretum
Next - Cedar of Lebannon