Wildlife of the Parks of South Dublin County 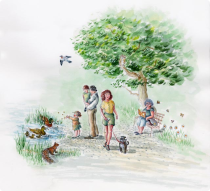 Wildlife in the Parks

Wildlife in the Parks

South Dublin County is well served by public parks and open spaces of which there are almost 4000 acres under the control of Parks and Landscape Services Section of South Dublin County Council. This is mainly comprised of four large regional parks at Tymon Park, Tallaght; Corkagh Park, Clondalkin; Griffeen Valley Park, Lucan and Dodder Valley Park between Tallaght and Rathfarnham and 50 neighbourhood parks such as Sean Walsh Memorial Park, Ballymount Park and Jobstown Park in Tallaght, Ballyowen Park, Lucan and Collinstown Park, Clondalkin. There are also numerous public open spaces in various housing estates throughout the County.

With increasing urbanisation of our cities and towns and the consequent distancing of the countryside from them, the presence of nature and wildlife in amenity parklands is extremely important in enriching the urban living environment.

The rich variety of habitats contained within the parks of South Dublin form a significant link in the overall network of wildlife corridors through Dublin's southern suburb. These parkland refuges permit the movement of wildlife and possess ecological characteristics essential to their survival.

In order to identify the range of flora, fauna and habitats present in our parks, the Parks & Landscape Services Department commissioned two major wildlife surveys for 5 Regional Parks and 15 neighbourhood Parks within the remit of South Dublin County Council.

Next - Rivers and the River Banks