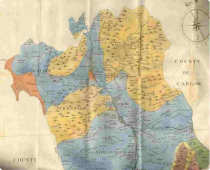 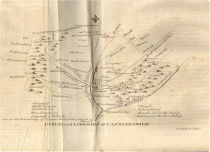 Castlecomer is located in the north-east of Kilkenny in the south-east of Ireland. The upland plateau area that surrounds it forms a discrete area. It is bounded on the east by the Barrow, the west by the Nore and dissected in the centre by the river Dinnin.

From the earliest times, the topography of the area has defined its history. The plateau has deterred settlement and at the same time has also provided a refuge for the dispossessed. This in effect has meant that its history has differed somewhat from the rest of Kilkenny.

Its geology, namely its coal deposits, has meant that it is one of the few areas in Ireland that has a coal-mining and industrial legacy more typical of the north of England. This dichotomy between the land isolating and at the same time drawing in outside influences, is a common theme in the area's history. 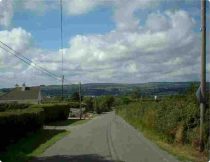 Castlecomer Plateau, from the North

Castlecomer Plateau, from the North

Various names and divisions had been used over time to encompass the area. From Celtic times names such as Magh Argeadh Ros, UiDuach and Idough to varying degrees described parts of the plateau. From Norman times onwards the Barony of Fassadinin covered the area and some adjoining ones.

In modern times the terms 'Castlecomer Plateau' and 'South Leinster Coalfield' have been in use.