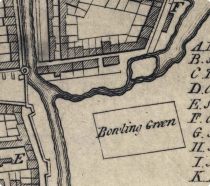 Detail from 1690 map showing developments to the north and south of the river channel.

Detail from 1690 map showing developments to the north and south of the river channel.

St Patrick's Street is built on parts of two marshy islands and the channel of the river Lee that flowed between them to the east of the old walled city of Cork. The map of 1545 clearly shows the bow-shaped river channel which gives the street its shape.

The draining of the marshes began in the early 17th century. By 1690 much progress had been made in reclaiming the north marsh. The map of 1690 shows a number of buildings on the northern marsh and a bowling green on the southern marsh.


The southern marsh between present-day St Patrick's Street and the South Mall was known first as King's Marsh and later as Dunscombe's Marsh. Some of the Dunscombe family were members of Cork Corporation and wealthy merchants. 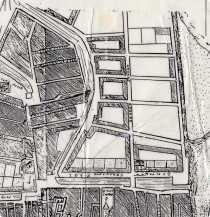 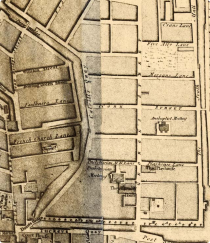 Detail from Rocque's map of Cork in 1759

A detail from John Rocque's map of Cork in 1759 showing the streets around the channel of the Lee on which St Patrick's Street was later built.

Detail from Rocque's map of Cork in 1759

A detail from John Rocque's map of Cork in 1759 showing the streets around the channel of the Lee on which St Patrick's Street was later built.


After the city walls had been partially destroyed in the 1690 siege of Cork the reclaiming of the marshes went on more quickly. Carty's map of 1726 shows French Church Lane, now called French Church Street, Bowling Green Street and William Street on the northern marsh French Church Street is named after French protestants called Huguenots who built a chapel on the street.

Rocque's map of 1759 shows many of the streets on the northern and southern sides of the channel which are still there today, although the names of some have changed. On the northern side Faulkener's Lane and Drawbridge Street are shown.


Drawbridge Street is named after the drawbridge which crossed the river channel and allowed ships access to the quays along the street. On the other side of the channel the northern half of Princes Street is called Meeting House Lane because of the Presbyterian chapel there and the southern half is called Playhouse Lane because there was a theatre there. Marlborough Street is shown but not named and Cook Street is mistakenly called Cork Street.

Butts's 1760 view of the city shows the drawbridge and the masts of some ships along the quays. The south and east quays were called Hoare's Quay and the Long Quay. The north and west quay was called Colville's Quay.


Further development took place on both sides of the river channel during the next twenty years. In 1783 the river channel was finally arched over and the street was formed. At first it was called the New Street. Later the name was changed to St Patrick's Street.

During the eighteenth century the economy of Cork prospered. The prosperity was due mainly to the export of beef, butter and textiles. Breweries and distilleries were established in the city. St Patrick's Street prospered along with the rest of Cork. Some of the nearby marshes were drained and other streets near St Patrick's Street were formed from the old river channels.

The opening of the first St Patrick's Bridge on 29 September 1789 made it easier for traffic from the northern suburbs to reach the street and this helped the development of the street. That bridge was destroyed during a terrible flood on 4 November 1853 and was replaced by the present bridge in 1859.

Detail from Butts's view of Cork in 1760