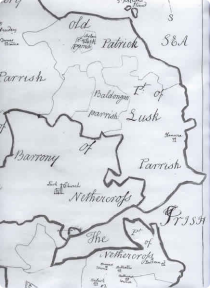 The Wars of the Roses and After

In 1461 James, 5th Earl of Ormond, was convicted of treason, and beheaded, because he espoused the Lancastrian cause in the War of the Roses.  Edward VI granted his lands, including Rush, to "Our beloved cousin", Gerald Fitzgerald.

But the Ormonds were not to remain out of favour for very long.  By 1507, the Ormonds, in the person of Thomas the 7th Earl, were back in possession.  When he died, in 1515, Sir Thomas was 'seized of the manors of Rush, Turvey, Balscadden and part of Lusk'.

In 1547, the lands were leased to one William Fitzwilliam, and in 1556 Thomas, 10th Earl of Ormond, appointed Christopher Barnwell as 'steward, receiver, surveyor, seneschal and chief sergeant' of his lands in Dublin, Louth, Meath, and Kildare.

Thomas,the 10th Earl was known as the Black Earl, because of his dark complexion. He dad been brought up as a Protestant, but became a Catholic before his death in 1614.

An interesting agreement, dated the 8th of August 1572, shows that Sir Thomas granted "Haystowne and Whitistowne, the quay and haven of Rush (Rogerstown)" to one Patridk Gough of Dublin for 21 years, at two shillings per annum.

Spirited Tenants And An Absent Lord

Perhaps because of their event-filled lives, and also, owning as they did the great Ormond Castle of Kilkenny, the Ormonds, during these years, seem to have had little time for their tenants in Rush. Judging from the following, it would appear to be so. On the 23rd of January 1506, John Alen, Dean of Dublin, wrote to Ormond as follows,

'Your towne of Rusche is fallen greatly in decay, and many tenements therein voide and somme ben roynose (ruinous), and been occupyet with pore people becaus the said towne have ben holden most of seamen and fishers, and they have no haven to more (moor) their Pickardys ne botes, nether to keep them from the tempest and stomres of the sea, but atte other havens and yppon (upon) other lordschippys in ferre compasse from them.

Whereupon my lord, all tenauntes hath desirst me that y should schewe unto your lordship that there is a convenient place for a haven within half a mile and lease to your said town of russe, and they hath begon and hath done costs and labores thereupon, and now they waxed wery (weary) and thynketh they be not able without your lordship to perform it to their purpose and truly I have comofrtet them to contynue, and see (cease?) not of their works.

In so much as they hath chosen two wardenesse to be oversehers (overseers) of the worke. I have causet them to cate a subsidy upon them self and they prefereth gift hit. Wold please your lordships to giff them 1 year or less of ellys (else) thei wilbei bounde to pay xx more agyn. Truly my lord I have conveneth with merchaundes and shippmen, and they telleth me, giffe that haven were made, your said town should prosper and encrease to your advoyle and your heyres (heirs?) and hit be performeth as hit is begon, a schippe of V (j) and V 1j tones may loge suffe therein for all maner wederes. Almight preserve your lordship ever in honour and prosperity.

There is no record of a reply to this letter, but on the of 25th of April 1511, the tenants of Rush and Fingal sent a petition to the Earl of Ormond, complaining 'of a decayed pier', which caused them great annoyance and hindrances, and unless it was seen to, they would 'no longer be able to dwell in your inhabitation, but must remove elsewhere'.

They also complained about his lordship's steward, Walter Goulding, 'we know him of such cruel demeanour that if he have any rule over us, we must and will avoid your lands, for we shall not agree with his conditions'.

All in all the relations between the tenants of Rush and the noble Earl do not appear to have been the happiest. The sheltered harbour and pier they required was eventually built in the reign of James II (1685-1688).