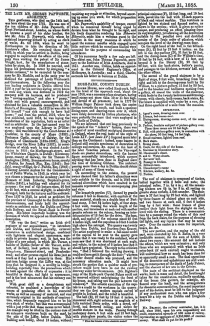 A page from 'The Builder'

A page from 'The Builder'

There is a description of the house which Elizabeth Palmer took possession of, in Austin Cooper's book, 'An 18th Century Antiquary'. He visited Kenure on the 9th of June 1783, and wrote as follows:

'About half a mile from the (Roman Catholic) Chapel is Rush House, once the seat of the Echlin family, and which now belongs to a Mr. Palmer. It is a large quadrangular building in the old style, terminated by a hewn parapet ornamented with urns. In the front is a small pediment supported by four Tuscan pillars, which evidently appears to be a modern addition. The situation of it is low, but the view of the sea agreeable. The improvements about it are very neat and kept in good order. It is a great addition to the appearance of the country and trees and plantations about being the only thing along the shore until about Balbriggan'.

It should be noted here that the house had until then been known as Rush House, it was the Palmers who later changed its name to Kenure Park. 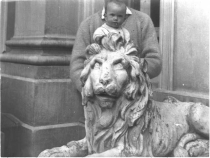 A photograph of a statue stone lion on the steps of Kenure House.

A photograph of a statue stone lion on the steps of Kenure House.

A photograph of 'the meat house'.

A photograph of 'the meat house'.

The architecture is stated to be generally late Georgian, although some authorities state that some Regency influences were to be seen. The house was magnificently furnished with Sheraton, Chippendale, and Regency furniture. The ornate plaster ceilings were by Robert West, and many beautiful paintings graced the walls. The house also boasted large collections of silver, porcelain and china.

The pillared entrance hall was lined with faux marble; an imposing divided mahogany staircase rose from the hall to a coloured glass canopy at roof level, on which was inscribed the arms and motto of the Palmer family 'Sic bene merenti Palma', which means 'The palm to the deserving'.

The family claimed they got the name Palmer during the Crusades when one of their forbears carried the palm into Jerusalem. (McLysaght states that the Palmers were of Norman decent, the original 'Le Paumer' meaning pilgrim). On the south side of the house were croquet lawns, tennis courts and an ornamental pond.

A pair of fierce looking lions flanked the portico. Beyond the house, down the north avenue, were the well tended walled gardens with their fountains, rare trees, rose gardens, herbaceous borders, and pergolas in the conservatories, on which grew peaches and figs. These gardens were open to the public every year in aid of the Jubilee Nurses' Fund.

At the back of the house, across a large cobbled yard, was the dairy with its gleaming marble (the local people were allowed in every evening, to buy milk). In the centre of this yard stood a small hexagonal brick building with iron hooks hanging from the ceiling, from which were hung sides of beef. Back further were the coach house, stables and farm buildings.

An image of a postcard of Kenure Church, 1950s.

An image of a postcard of Kenure Church, 1950s. 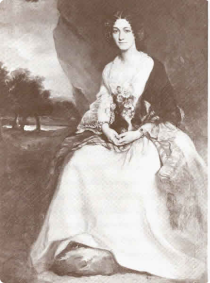 A portrait of Ellen Palmer

A portrait of Ellen Palmer, by Sir Francis Grant.

A portrait of Ellen Palmer

A portrait of Ellen Palmer, by Sir Francis Grant.

In 1866, the beautiful little Kenure Church, on the Skerries Road, was built and endowed by the Palmers. The building was designed by James Edward Rogers, (1838-1896), (who also designed the Church of Ireland church in Skerries), and built by Gilbert Cockburn and Son, at a cost of approximately Ł1200. The buildings is of cut limestone with bands of red sandstone, and is surmounted by a one arch bell turret, the arch of which is carried on marble shafts, as are the window arches. The porch is of Portland stone and red sandstone, finely moulded and carved.

Over the communion table is a beautiful stained glass window in memory of Mary Ellen Peel, nee Ellen Palmer, who was the daughter of Sir Roger Palmer, the 4th Baronet. She married Archie Peel, a nephew of the Prime Minister, but she died tragically, ten days after giving birth to her third child, in 1863. Her colourful and romantic life is described in Betty Askwith's introduction to "Crimean Courtship", in which Ellen's recently discovered diaries are published

There is also a circular stained glass window in the western gable of the chapel, which is unusual and exquisite. Even the roof slates of the building are set in a shaded pattern of diamonds and the building is in a peaceful setting surrounded by trees. In 1899, Archbishop Peacock of Dublin consecrated the burial ground around the church. On that occasion, Sir Roger Palmer read the lesson, and Lady Gertrude presided at the organ, and "conducted the psalmody of a hearty and efficient choir". The congregation and clergy afterwards dined in Kenure House.

Sir Roger and Lady Palmer are commemorated on memorial tablets inside the church. Today the congregation is small in winter, but augmented by the influx of visitors in summer. It forms a part of the parish of Holmpatrick/Rush. Those who are privileged to worship there have a great affection for and pride in the beautiful little church. During the building of St. Maur's R.C. church, permission was very generously offered for the use of Kenure Church, and it provided a beautiful setting for many weddings.