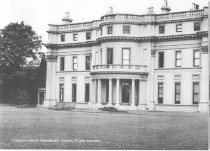 Kenure House with benches outside.

Kenure House with benches outside. 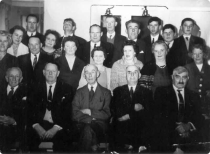 A photograph of Col. Fenwick-Palmer and the staff of Kenure House.

A photograph of Col. Fenwick-Palmer and the staff of Kenure House.

In 1938 I went to live with my Aunt Kate in the 'big house' in Kenure Park. Kenure was the property of Lt. Col. Fenwick-Palmer, and my aunt was the housekeeper. She was a member of the Church of Ireland, and from a strict Protestant family who had lived on the Kenure estate from Sir Roger Palmer's time, with the kind consent of Sir Roger and his wife Lady Milicent.

The staff consisted of about twenty servants ranging from Lindsay the butler and Preston the footman, to the lowliest of them all - the scullery and stillroom maids. Lindsay was called a "gentleman's gentleman", but in his own right he was a gentleman in manner and bearing, soft-spoken and somewhat reserved. The male guests usually brought their own valets, and the ladies their own 'lady's maids' to tend to their personal needs. My aunt had her own apartments and her personal maid. The working day for the servants began at 6 in the morning, and the working week consisted of six and a half days, with a half-day from 2 pm to 10 pm allowed for free time The estate gates and the house doors were locked each night at 10, so everybody had to be back by that time. Wages were about Ŗ1per week for the butler, and ten shillings for the female servants, plus board and lodging.

My aunt would be called each morning, at 7 precisely, by her maid, who would bring her a glass of lukewarm gargling water, and at 7.30 a cup of tea, while she bathed. At 8 precisely she would arrive in her dining room and I would stand up and hold her chair for her while she sat down. She wore spectacles without rims, and I always knew when I saw her what sort of mood she was in. She was at that time almost 60 years old, and unmarried. Rather severe at the best of times, a look from her could be withering. She was Protestant and I was Catholic, my father having changed his religion when he married, very much against his family's wishes. For some, reason unknown to me, she liked me and wanted to make sure that I was brought up as a gentleman, so she wanted me to receive training under Lindsay, the butler, in dining room etiquette, and under the footman and valets, in behaviour when speaking with the gentry and caring for my clothes.

At 8.30 each morning, my aunt would begin her tour of inspection, starting at the kitchen. The kitchen and scullery staff would line up in the corridor outside the kitchen, and in military style she would inspect them from head to toe. Her next stop would be the pantry, where she would cast her eye over the glass and silverware. This was Lindsay's domain and Preston, the footman, would stand by his side while my aunt cast her eye over both of them. Lindsay and Preston wore tails and black tie during the morning, and jacket and bow tie in the afternoon. At 9, accompanied by the head housemaid, my aunt made her daily inspection of the house. Then, at 10 she would meet the Colonel in the study to present the menu of the day, together with correspondence and the newspapers. That was also the time when anything of consequence would be discussed.

Previous - The Curtain Falls
Next - The Colonel