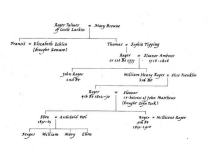 A section of the family tree

An image of a section of the Palmer family tree.

A section of the family tree

An image of a section of the Palmer family tree.

The Palmer family had come to Ireland in 1681, from Norfolk, and had acquired lands in County Mayo, where by the end of the 19th Century, they had amassed 80,000 acres. In 1751 Roger Palmer married Miss Eleanor Ambrose, a Catholic. Her father, Michael Ambrose, was a well educated and well connected man, who, finding himself barred from the professions by religion, had become a brewer, and had amassed a large fortune. In 'Burke's Peerage' his address is given as Ambrose Hall, County Dublin, (perhaps Mount Ambrose, near Swords).

Eleanor was beautiful, witty, intellectual and a fervent patriot. Several years before her marriage to Roger Palmer, she managed to penetrate Dublin society, despite the fact that she was a Catholic. Indeed, she became a darling of the Viceregal Court, and during the Viceroyalty of Lord Chesterfield, she and her sister Clara were the prominent socialites of the Castle set. Chesterfield was attracted to her, and she soon accompanied him to all official ceremonies. Influenced by her opinions, Chesterfield is reported to have told George II that 'poverty not Popery was to be feared in Ireland', he had found 'only one dangerous papist, the brightness of whose eyes and charms, and whose conversation were indeed dangerous', and her name was Eleanor Ambrose. He wrote the famous doggerel:

'Tell me Ambrose where's the jest
Of wearing orange on thy breast,
When underneath that bosom shows
The whiteness of a rebel rose.'

Eleanor, however, was a woman of strong moral principles and ensured the relationship remained platonic. In her house she had a portrait of the Viceroy, whom she regarded as the only Englishman sympathetic to the suffering of her co-religionists. It is thought likely that it was through the good offices of Chesterfield that Sir Roger Palmer was created a baronet in 1777. Having outlived her husband, Eleanor Palmer died at her house in Henry Street, Dublin, in 1816, aged 98.

It was another Roger Palmer, son of Elizabeth Echlin and Francis Palmer, who on his deathbed in 1811, bequeathed what is known in Rush as the 'May Money'. He bequeathed 'Ł2,500 sterling to be laid out in Ireland in proper securities at 6% p.a. compound interest, and I desire that the interest be employed every succeeding year, in the month of May, for the purpose of giving a marriage gift to ten women, never married, between the ages of 20 and 32 years, at the rate of Ł10 each.

They must be from the poorest and born upon any part of my estate in the County of Dublin, but women born in the environs of the town of Rush, within two miles of my estate be preferred.' In the mid 19th Century, after administrative difficulties, the Commissioners of Charitable Donations took over the bequest. The fund was vested in the Catholic Parish Priest, and the Protestant Rector of Rush, along with the agent of the Palmer estate.

According to the late Miss Margaret Carroll, by 1951 over Ł10,000 had been paid out in dowries. The fund still exists, although it is dormant, the legal trustees being the only people empowered to establish its present status.

The Fire And After

When Roger Palmer (son of Elizabeth Echlin and Francis Palmer), died, Kenure passed to Sir Roger Palmer of Mayo, who was also M.P. for Portarlington. Sir Roger had three sons, Francis who predeceased him, John Roger who succeeded him and died in 1819, and William Henry Roger, who then succeeded to the title. His aunt, Elizabeth Palmer, lived in Kenure in the
early 1820's.

It was she who gave the parish of Rush the land on which the Parochial House (now the site of the new Church) was built. She leased it to the parish in 1823, at a rent not to be demanded during her lifetime. Sir William Henry Roger Palmer, the 3rd Baronet, was living at Kenure in 1827, when the house, which had originally been built by the Duke of Ormond in 1703, was damaged by fire. Soon afterwards he took on the services of an architect who flamboyantly enlarged the house. The architect was George Papworth, who was also responsible for designing King's Bridge, the actual bridge near the Dublin railway station of the same name.

Sir William Henry was, as far as we know, the only member of the family to be buried in Rush. He died in May 1840, aged 72, and is buried inside the ruined Church in Kenure Cemetery. His tomb, which was erected by his wife Lady Alice, now learns to one side, and is surrounded by a rusted iron railing.

A Plan from 'The Builder'

An image of a plan of Kenure House.

A photograph of the tomb of Sir William Henry Palmer.