After Culloden - A Stately Home and A Fallen Duke 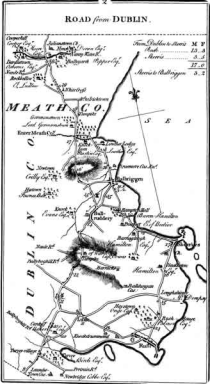 The road from Dublin

The road from Dublin

Taylor and Skinner's Maps of the Roads of Ireland, page 2.
Enlarge image

James, the 2nd Duke of Ormond, inherited Kenure in 1703. It was he who built the house, which stood until its destruction by fire in 1827.

James, the 2nd Duke of Ormond, was one of the first to join William of Orange, whom he entertained royally in Kilkenny Castle. High in favour during the reigns of William and Mary, and Queen Anne, James was impeached at the beginning of the reign of George I.

In August 1714, because of his support for the Jacobite attempt to restore the Stuarts to the throne, he had to flee to France.  His property was confiscated and was vested in the crown. Thus ended the connection of the Butlers of Ormond with Kenure.

The Irish Earldoms of Ormond and Ossory eventually passed to John Butler of Kilcash, but Kenure was listed in 'The Williamite Confiscation of Ireland', by J.G. Simms, as being purchased by a Robert Echlin. Thus began the next phase in the history of Kenure. 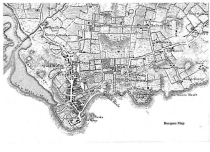 Rush by the sea, inside cover.
Enlarge image

The Echlins were originally Scottish, but had settled in Northern Ireland. Robert Echlin was Parson of Omagh and Dean of Tuam. The first recorded Echlin to occupy Kenure was Henry Echlin, Robert's second son. He had been appointed a Sergeant-at-Law in 1683, having studied at Lincoln's Inn. In 1692 he was knighted, and in 1721, he was created a Baronet. He died in 1725.

Henry was succeeded by his grandson, Sir Robert, who died in 1757, and is buried near the Round Tower in Lusk. His tomb was said to be originally inside the old church, but in the big wind of 1839 the roof was blown off. The church was rebuilt in shortened form, leaving Sir Robert outside! His epitaph reads:


Here lies a man without pretence,
Blessed with plain reason and common sense,
Calmly he looked on either life and here
Saw nothing to regret or there to fear.
From nature's temperate feast rose satisfied
Thanked Heaven that he lived, and that he died.

The lines of this epitaph were apparently appropriated from two of Alexander Pope's best epitaphs, the first two lines from that on a Mr. Corbett, and the last four lines from that of a Mr. Elijah Fenton.

Sir Robert Echlin had two sons who died young, and the title passed to his nephew Henry. Henry Echlin was a great character, but also a total and profligate rogue, and he lost the estate due to gambling debts. Kenure eventually became the property of Sir Robert's daughter, Elizabeth, whom Sir Robert had disinherited, and to whom he left one shilling in his will, because she had married the 'unsuitable' Francis Palmer, of Castlelacken, Palmerstown, County Mayo. When the estate went into debt under Henry Echlin, Elizabeth defiantly took the opportunity to buy it, and thus the estate passed into the Palmer family.