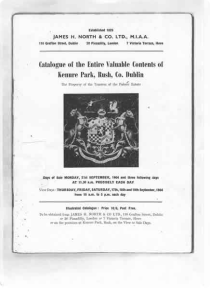 The contents of the house were auctioned in September 1964, the auction lasted four days and realised Ł250.000, which would be over Ł1,000,000 in present day values. As the people of Rush rambled round Kenure House during the auction, they were able to feast their eyes for the first time on its faded grandeur. Socially, Kenure had been a place apart from the ordinary life of the town, but it had been there for hundreds of years, an essential part of the Rush scene. The general feeling was one of regret and disbelief that it was disintegrating.

As landlords, the Palmers had not been the worst. However, there had been some evictions, and one action, which is still adversely remembered, was the removal of some of their tenants from their ancient holdings in order to lengthen the main avenue and have the main entrance gate near the town. Nevertheless the Palmers were in many ways beneficent to Rush. They gave land for the Catholic and Protestant churches, for a presbytery and for a teacher's residence. In 1896, when the Catholic church was being refurbished, they donated the seating for the nave, and a brass memorial tablet in the church testifies to this. A goodly acreage within the estate was allocated to the local cricket club, and it was certainly the most beautifully situated cricket pitch in North County Dublin.

To return to the last act in the story of Kenure House, the County Council were left with an empty mansion, for which they could find no buyer. The house continued to deteriorate. During this time it was rented to a film company and a few films were made there, including "Ten Little Indians", "Rocket to the Moon", and "The Fall of Fu Manchu".

In 1978, after a series of incidents in which the house was vandalized and set on fire, with the inevitable water damage that resulted from the fire engines having to put out the blaze, the house was in a very dangerous condition structurally. The County Council decided it had no choice but to demolish the house. Within a few days, all that was left of this once great house was a mountain of rubble, from which the massive portico arose, forlorn and lonely against the sky. 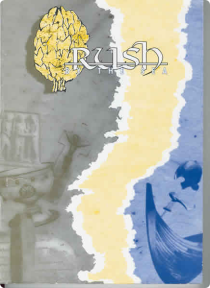 Image of the cover illustration of "Rush by the Sea"

Image of the cover illustration of "Rush by the Sea"

Relics of an Older Time

The Great House built by the Duke of Ormond and rebuilt by the Palmers has ceased to exist, but it is possible to re-trace today the solid stone remains of much of what was listed in the Survey of 1654.The Ruined Chapel still stands, enclosing the tombs of the great. It is also the resting place of priests. On the wall is a list of clerics -

Surrounded by the cemetery, it is a place of peace. The Church is dedicated to St. Catherine, having formerly been dedicated to St. Damnan. (A grand synod was held in Lusk by St. Adamnanus, in 695). In 1530, the chapels appended to the parish of Lusk were stated to be Rush, situated in the land of the Earl of Ormond, Kilnure and Knightstown (now Whitestown)'. Perhaps this old spelling of 'Kilnure' indicates an older name 'The Church of the Yew Trees', later anglicised as Kenure. Dr Donnelly in his 'History of the Dublin Parishes' says this was the church of Rush in Celtic times, before the coming of the Normans.

The 7th century holy man, St Cuanne, is also associated with Rush.Nearby the ruined church is a well dedicated to St.Catherine. It is situated to the left of the bridge as one approaches St.Catherine's Estate. The well has now been closed by the County Council, for safety reasons. The remains of an ice house lie across the old bridge, which spans the brook near the stone ruin by the playing field. The brook itself used to feed an ornamental pond, now filled in after a drowning tragedy some years ago, and close beside it stood the walled gardens of the estate.The pillar on the green, in the Kenure Park Housing Estate, had a companion in the former wooded area in the left hand corner.

Previous - The Last Palmers
Next - Recollections