The last Palmer baronet was Lt. General Roger Palmer, M.P. for Mayo 1857-1865.He was the 5th Baronet, and Ellen Palmer's only brother. He was one of the last surviving officers of the famous Charge of the Light Brigade in the Crimean War. Then a Lieutenant of the 11th Hussars, he is credited, in Kingslake's account of the action, with capturing a high ranking Russian officer, who surrendered his sword to him. On another occasion he alerted his comrades to an approaching Russian force. He survived the 'Valley of Death' by 56 years, and occupied Kenure with his wife, Lady Gertrude Millicent Palmer, until his death in 1910.

Lady Palmer survived her husband for many years. She continued to spend much of her time in Kenure until her death in 1929. There are people in Rush who still remember the parties held in the house for the children of the town. She is credited with writing a little song 'Happy are we all together', which was sung at the parties. Nowadays it is still sung, in a somewhat altered form, as a 'Friendship Song' at the end of meetings at the Rush I.C.A. 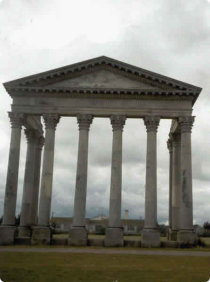 The End of an Era

Sir Roger and Lady Palmer left no heirs, and the property devolved to Colonel Roderick Henry Fenwick-Palmer. Col. Palmer had fought in the First World War, and still bore the marks of shrapnel wounds to his face. He had property of his own in Wrexham, North Wales, and only came to Kenure in the summer. He had a great love of horses and raised some good ones in Kenure, which when sold, went on to do very well for their owners.

A plain man, he was not given to living the high life, apart from dining occasionally with friends, such as the late Lord Revelstoke of Lambay. You could meet him on the avenue, and mistake him for one of the workers on the estate, such was his aversion to dressing up. He spent a lot of money trying to keep the house in repair. He was finally defeated by rising costs on a property which was not making money. Part of the estate had already been sold years before. He eventually sold Kenure to the Irish Land Commission, in 1964, for Ł70.000. Most of the land was divided up among local farmers. The remainder was sold to Dublin County Council for housing and playing fields.

The woodland was cleared and all that now remains of the trees, which once dominated the skyline, is a small area around the main gate. The front gate lodge is now the local Scouts' Den. The gate lodge at Skerries Road belongs to Rush Cricket Club, which has beautifully refurbished it. The late Mr Tom Fagan lived in the North Lodge, which he occupied while employed in Kenure until his recent death. The rest, including the beautiful Keeper's Lodge, the walled garden, the Steward's Lodge, the pond and shady avenues, have all gone the way of the big house itself. Only the portico remains, a stark remainder of what once was there.

A photograph of the main staircase in Kenure House.

A photograph of Kenure House derelict.