Jarlath, the First Bishop and Abbot of Tuam? 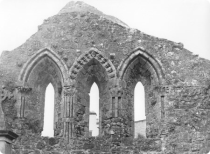 A photograph of Saint Jarlath's Chapel, Tuam taken in 1953.

A photograph of Saint Jarlath's Chapel, Tuam taken in 1953.

I have referred to this controversy because it is of relevance to these notes inasmuch as Kilbannon, if founded by St. Patrick, must have been the first Church in the Tuam district and the source from which the See has arisen. In addition, it was here that Jarlath, the first Bishop and Abbot of Tuam, is reputed to have studied under Benignus and to have been ordained by him. Jarlath was the son of Loga and of Mongfinn, daughter of Ciarduban of the family of Ceneann, who were of the Conmaicne. What is now the Barony of Dunmore was occupied by the Conmaicne de Cineal Dubhain and it may, accordingly be assumed that he was born in the Tuam district (see Harris - Antiqu. Ch.7). Tradition has it that in addition to studying under Benignus he was also a pupil of Enda of Aran for a time. His first foundation.

Thereafter it was Ard Ibair, the place where men wrought a crime; after that it became Tuaim Da Gualann, when Jarlath gave it his blessing There the chariot's shaft was broken; if anyone makes enquiry Tuaim Da Gualann (this is ...) was its name among the learned. Here ye have the true story, the reason of Tuam's name, when Jarlath had his home there, what time the Britons came. A red shoulder is that Shoulder since they joined combat there; each man slew his fellow: it was cause of great grief. Jarlath (called) thereafter the Britons to him after matins: he implanted the Faith in them, (and they heard him) preaching. (The next verse seems to refer to a miracle by Jarlath if we are to read mirbaile in line 46). This verse is illegible".

Until some years ago Tuaim Da Gualainn was accepted as meaning 'the tumulus of the shoulders' but nowadays 'Guala' is interpreted as being the surname of a local pagan chieftain. I can find no authority for this interpretation, however, and verses nine and ten are of particular interest in as much as 'guala' is specifically stated to mean a shoulder.

Of Jarlath's Church, Colgan in his Catalogue of the Churches of the Diocese of Tuam (AA.SS. 310) says: "Ecclesia cathedralis Tuamensis, sita Tuamiae, vocatur Tempull Iarlaithe, dicata S. Hierlation, primo episcopo Tuamiae, antequam haec sedes in archiepiscopalem erigeretur". There is no trace of this first Church of Tuam nowadays, nor do we even know the site upon which it stood. Presumably, however, it conformed in design with other foundations of the period and the following notes may therefore be of some interest.

The earliest Churches were made of woven sticks plastered with clay and having thatched roofs. Later buildings were made of oaken planks and this form of building was popular up to the 12th century in districts where wood was the economic building medium. A church built in his fashion was called a 'Duirtheach' i.e. an oaken house. St. Cianan of Duleek is said to have been the first to have erected a church of stone and lime cement (called a daimhliag), but, unfortunately, we do not know for sure the date of this project. The Annals of Ulster, The Annals of Inisfallen and the Four Masters give 489A.D. as the date of Cianan's death, but Colgan refers to a Life of St. Mochua which suggests that the Church was not erected until about 540A.D. Petrie agrees that this was probably one of the first stone Churches in Ireland, and Ware (Harris ed. P. 137) quotes from the Office of St. Cianan: "That St. Cianan built a church of stone in this place; and that from thence it took the name of Damleagh; for that before this time the churches of Ireland were built of wattles and boards". Petrie (Ecclesiastical Architecture of Ireland p. 343-358) deals in detail with these duirtheachs and daimhliags.

The foundation at Tuam probably consisted of a stone oratory and in dimensions about 12ft x 8ft 6ins. (These are the measurements of the oratory at Inisglora built by St. Brendan, who was a contemporary of St. Jarlath). Being a teacher of some repute, a monastic community probably grew up around his Church and such establishment were usually surrounded by a dry stonewall, irregular in contour and not very high. This enclosing wall or cashel appears to have been erected merely to ensure privacy and not as a defensive measure. According to The Tripartite Life, all Patrician foundations conformed to a standard pattern, the surrounding wall being about 150 yards in circumference. Inside the cashel there was usually in addition to the church, a refectory, a guest house and the cells of the monks which were sometimes of a bee-hive design.

Examples of monastic settlements of the period may still be seen at Innishmurray off Sligo, Ard Illaun, Inishglora, Kilmainbeg, Illauncolumbkill, and other places throughout Connaught. Fr. Ryan (Irish Monasticism p. 285) deals comprehensively with this subject. With reference to monastic schools, this eminent writer says: "Though school buildings doubtless existed, we are justified in concluding from Bede that the highest form of instruction was of a more private and personal character, imparted by the distinguished teachers among the monks to students who visited them in their cells".

St. Jarlath is reputed to have dedicated his Church to Our Lady Assumed into Heaven, but this dedication may have been at a much later date. In fact many authorities suggest that such dedications were unusual in early Christian times in Ireland. Fr. Ryan agrees on this point, but he points out that they were not unknown. He adds that "at Glendalough one Church was dedicated to The Holy Trinity; another to Our Lady". In this he differs with Petrie, who states that "none of the ancient Irish Churches were dedicated to the Virgin, or to any of the foreign Saints, previously to the twelfth century ... and there is not a word in the ancient Lives of St. Kevin which would indicate that any of the Churches of Glendalough were so dedicated at the period when they were written".

There is no record of the date of Jarlath's death but it must have occurred towards the end of the sixth century; and the historical sources contain very few references to his church during the next five hundred years.