Inventory of the Augustinian Abbey of Dunmore

" Imprimis 4 cowes whereof 2 are in calfe and the other two milch with their calfs, 4 strappers, 1 bull of three years, 1 dry Cow, 2 heafers, 2 bullock of 2 yeares, 2 half yearlings, 3 mars whereof some in fole. 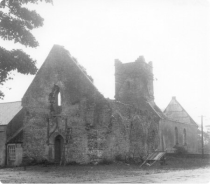 A photograph of Dunmore Abbey.

A photograph of Dunmore Abbey.

Copper pan which contains 2 barrells, and 3 black potts, 1 iron spit, 6 brass candle stickes, 1 pewter flagon, 2 pewter dishes, 3 half barrel casks, 4 barrell casks, 3 Keews, 3 chesks, 1 long table and a short one, 2 small each to contain half a barrel 1 wood fferkin, 1 small vessel, 1 payre of stools, 2 tables clothes, 3 napkins, 3 towells, mettle griddle, 1 iron crowe, 1 pickle axe, 2 spades, 1 wooden shovel with an iron head, beside some wooden trenches, wooden chambeyrotts and some other small goods.""Whereas certain writyings and agreements bearing date 10 ffeby past betwixt me the undernamed Augustine Bodkin and the friers of the Convent of Dunmore videlecit Christopher Dillon, William Egan and Symon Moran touching and concerning the foregoing goods and chattels of the said Convent now deposited in my hands in trust as more at large may appear by the said written agreement - Know all men that I the said Augustine Bodkin do hereby and by these presents acknowledge to have received into my possession the goods and chattels mentioned in the above Inventory on trust for the above named friers and the said Convent and to no other end and intention than to preserve the same for the use of the said friers and Convent aforesaid. We therefore have hereunto putt our hands and fixed our seales the 19th day of April in the year 1698.""The true meaning of the said Agreement is that whereas an Act of Parliament for banishing all papists exercising any ecclesiastical jurisdiction and all regular of the Romish clergy... We the said friars have therefore agreed and consented to put our trust and confidence in our well beloved Augustine Bodkin to take into his custody the said chattels and household goods to be kept for us and for our use in manner following that is to say the said Augustine Bodkin is to possess and enjoy the farm of Derrynegran (which now the said friars hold from him under a certain rent) for his own use, provided always that if the Government should dispense with the Catholic clergy so as not to transport us the friars of the said Convent and that we or any of us should come to live together again, the said Augustine Bodkin is to lett us have the said farm of Derrynegran according to our lease to the expirey thereof.
April 19, 1698."

Previous - Quarrying in Dunmore
Back to