The forerunner to a Public Library in Kilkenny was the Kilkenny Circulating Library in the early 1800's which had a reading room for members in the Tholsel which is now known as City Hall, the home of Kilkenny Borough Council. The annual subscription fee was 11 shillings and 4 pence (12 pennies = 1 shelling; 20 shillings = 1 pound).

In 1903/04 Kilkenny Corporation passed a resolution to adopt the Public Libraries (Ireland) Act 1855. This Act allowed for the establishment of public libraries in towns with populations greater than 5,000. All libraries established under the Act had to have populations greater than 5,000. The Library was to be supported from the rates (local tax) and the maximum rate that could be levied was one penny in the pound.

The Corporation approached Andrew Carnegie for a grant to aid the establishment of a free library service. Andrew Carnegie was a Scottish-born U.S. steel industrialist and philanthropist who provided money towards the building of Public libraries in the U.S.A., U.K. and Ireland and the English-speaking world. He would build and equip the library on condition that the local authority provided the site and would maintain the service once established. Ł2,750 was promised by Carnegie for Kilkenny but was reduced to Ł2,100 because the rate struck by the Corporation was so low. (The rate was to yield Ł140 but only yielded Ł105.)

The site at John's Quay was purchased for Ł600, by Lady Desart , widow of  William Ulick O'Connor Cuffe, 4th Earl of Desart.  She also paid for the furniture. A noted local philanthropist she had established local woodworking and woollen industries. The foundation stone was laid in 1908. In 1910 the Library was handed over to the Corporation and was opened on the 3rd November by Lady Desart. Later that day she was conferred with the freedom of the City. Membership of the Library was free to the residents of the Borough, while there was a charge for non-residents of 2 shillings and 6 old pence, or a half crown (equivalent of one eight of an Irish punt).

The Reading Society books were transferred to the new library in 1911.

The library was all contained in a square shaped single floor. The original had six rooms in total, a Gymnasium used for the library, Reference Room, Librarian's Room, lending department, reading room and the ladies' room with an attached toilet. 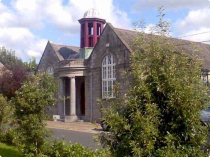 The Classical effect front had a semi-circular entrance flanked by limestone Tuscan columns. A tower like cupola crowns the building. The building itself was constructed with solid concrete blocks, one of the first examples of this type of construction in Ireland. Until 1972, the Carnegie Library was the only purpose built facility offering a range of library services in the County

The main changes to the library in intervening years have reflected changes in library practice, namely the change from closed access collections to open access to items by the public. This has seen a reduction in rooms to four, namely adult lending, children's, reference and staff facilities. The Library also contains two toilet facilities.