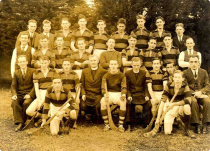 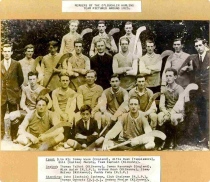 The local GAA club is the heart of many a parish, big or small, in Ireland. St John's may be a bigger parish than most, but O'Loughlin Gaels has always occupied a special place in the life of the Parish.

As Conor Denieffe reveals in The Continent Ab·, his excellent history of Gaelic games in St John's, the first recorded match, a game of football - played under GAA rules in the parish took place in front of 4,000 spectators in Dunmore in March 1886, two years after the Association was founded. By October 1887 the St John's John O'Leary Hurling Club. However it was to be another club taht became synonomous with St. John's Parish.

The original O'Loughlins club was formed in 1924, with the name chosen as a tribute to the O'Loughlin family, benefactors of the parish. The club lasted for ten years before folding. A succession of outfits followed at different periods and in various parts of the parish before an all-encompassing club was finally formed in 1969. St John's curate Fr Tom Murphy, a native of the Rower who won three All Ireland senior hurling medals with Kilkenny in the 1960s, was the driving force behind the initiative. The first meeting was held in St John's presbytery. Significantly, the Dunmore and Johnswell areas were represented; this would be a club for the entire parish. The land that is now St John's Park was purchased in 1975 for Ż3,500 and a fine clubhouse, which was subsequently extended in 1985 and 1997, opened in 1979 at a cost of Ż50,000, the relatively low price tag being due to the large amount of voluntary labour that went into it. 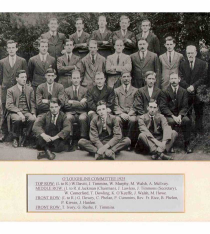 On the field, O'Loughlins have been well acquainted with Kipling's two impostors, triumph and disaster, the latter a more familiar acquaintance in the club's formative years, it has to be said. But there golden moments too, as when the national AIB Club of the Year award was won in 1981, the same year in which Eddie Kennedy from Maudlin Street captained Kilkenny to win the All Ireland minor title. Eventually the great leap forward arrived: winning the Kilkenny junior and intermediate titles in successive years, 1995-96, provided the springboard to greater things.

On a never to be forgotten autumn afternoon in 2001, O'Loughlins became county senior champions for the first time. A direct result of this was that Andy Comerford from Meadow Way captained Kilkenny to All Ireland glory in 2002, another signal day for the club. A second Kilkenny senior crown was achieved in 2003 and the Leinster club title added soon afterwards. in 2008, Kilkenny completed the All Ireland three-in-a-row, and thereby went outright top of the roll of honour for the first time ever on 31 titles, thanks in no small part to the efforts of Brian Hogan and Martin Comerford, the team's centre-back and centre-forward respectively.

Previous - Education
Back to