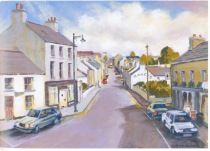 Brain Gallagher's colour painting of the County Donegal Heritage Town of Ardara. In this painting the heathery purples of the surrounding area are used to full effect.

Brain Gallagher's colour painting of the County Donegal Heritage Town of Ardara. In this painting the heathery purples of the surrounding area are used to full effect.

Ardara is a small commercial and market town on the N65, at a pivotal point linking southwest and west Donegal.


The name Ard a' Ratha (high hill of the fort) comes from the earthen ring-fort, which crowns the hill to the northeast of the town. Christianity came to Ardara early in the C6th. St Conall Caol, who died about 596, was abbot of a famous monastery on the island of Inniskeel and a direct descendant of St Colmcille. 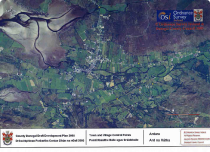 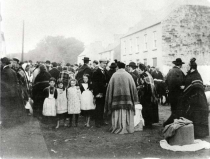 Photograph taken during a Fair Day in Ardara, Co Donegal c1880s. By permission from the National Museum of Ireland

Photograph taken during a Fair Day in Ardara, Co Donegal c1880s. By permission from the National Museum of Ireland

Almost every townland has its own tragic story of "Cromwell's War"; a group of people were driven over the cliff into the sea at Poll a' Tarribh in Loughros, a group of up to 500 who took refuge in one of the Caves of Maghera were betrayed and slaughtered by Cromwellian forces.

From the middle of the C17th to the end of the C19th the Nesbitt family of Woodhill was closely associated with the growth and development of Ardara. Alexander Nesbitt was the first of this branch who came from Scotland to Ireland. In 1669 he got a fee farm grant of a small estate in Ardara. He married his cousin Alice, daughter of the Rev. Alexander Conyngham, Dean of Raphoe, and established his residence on a beautiful glade adjacent to the town, and called it Woodhill, where subsequently six or seven generations of Nesbitts lived.

The town has a long association with the tweed and knitwear industries, and has been designated as a "Heritage Town" on the basis of this tradition of weaving and knitting.

From the 1870s on, a number of people helped to put this trade back on its feet, including Neil McNelis, who established a hand-spun cottage industry. And Mrs Ernest Hart, who revived tha art of dyeing. The Gillespie brothers, originally from Co Down made high-quality looms. The revival was enormously boosted when the Congested Districts Board (CDB) was set up in 1891.

It was resolved to improve the quality of tweed by awarding prizes at the Ardara fair, and to press for the establishment of a depot for the inspection of webs of tweed and flannel. Lace schools were also set up throughout Donegal; there was a crochet class in Ardara, and the end products were sold at the Irish Lace Depot in Dublin. Income in the town rose significantly, and its reputation was enhanced. Between 1897 and 1898, over 1500 pieces of cloth with a value of over Ł5,000 had been sold.

Previous - The Heritage Towns of Donegal
Next - Ardara and Donegal Tweed