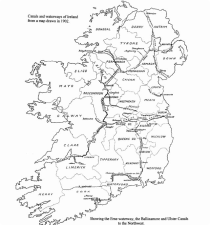 A map of the canals and waterways of Ireland showing the Shannon- Erne waterway, the Ballinamore and Ulster Canals

A map of the canals and waterways of Ireland showing the Shannon- Erne waterway, the Ballinamore and Ulster Canals

In 1838 a young surveyor, William Mulvaney was commissioned to find a route which would join the two canal systemsof the Rivers Shannon and Erne. His plan was simple; to construct a straightforward still-water canal. It was to comprise of three sections: the Leitrim Reach, the Summit Reach and Woodford Reach. This is the route of the waterway today. The Shannon-Erne Waterway started life as the Ballinamore-Ballyconnell Canal in 1846, after four years of planning. At one stage, 7,000 men were employed on the canal, giving great relief for people in the famine years of 1846-47, except on the occasions when funds ran out. Gunpowder was used to shift rocks and steam-powered dredgers to deepen the course of the canal across the lakes. By the time it opened in 1860, the railways had taken over most of the transportation trade. Some nine years later the waterway closed down. During its lifetime it had carried only eight boats - a total of less than one a year.

Over the next 122 years nature reclaimed this magnificent feat of engineering which spanned the 62.5 kilometres of connecting waterway between Ireland's two largest and longest rivers. Those ensuing years of almost a century and a quarter saw the virtual collapse of the canal's physical structure and the proliferation of flora and fauna making the system into one of the country's great unspoilt and indeed undiscovered wildernesses. During the eighties the Irish tourism and leisure industry was reaching maturity and recognition of the potential for inland waterways and other natural resources blossomed into reality. Another chapter was to open on the Shannon-Erne canal. Other forces were at work to make the re-opening possible. There were positive political reasons for pressing ahead with the plan. The link served as a visible and symbolic link. between two communities North and South. With the goodwill of both Irish and British governments the project commenced in 1991 and became accessible to traffic within three years - opening in 1994.

The undertaking itself was as ambitious as it was costly. The Ł30 million funding came mainly from the European Union Regional Development Fund, the International Fund for Ireland and the E.S.B. Work was planned and carried out by E.S.B. International and the Office of Public Works and the Northern Ireland Department of Agriculture maintain the canal jointly. The waterway today although following the exact route of the original is radically different in appearance. All sixteen locks from Leitrim village in the west to Corragwill on the Fermanagh Cavan border had to be systematically rebuilt. The old cut stones were removed one by one and the locks themselves strengthened by reinforced concrete. The stones were then replaced to give originality to the facade. The locks are all electrically operated with the use of a "smart card" costing around Ł10. One of the real wonders of the works is the speed at which nature has once again reclaimed its rightful place along the reconstructed banks and dredged waters. Whitethorn, willow and oak proliferate mile after mile. The environmental care taken during reconstruction is evident everywhere, albeit discreetly. The waterway was mostly excavated from one bank only; sometimes the machines actually crawled along the riverbed or were floated on pontoons to protect the fragile banks. The work was only done during the summer and scheduled to avoid disruption to spawning and nesting, flowering, and migration. Commercially speaking, the success of the canal is evident right along its route. Already established guesthouses and small hotels have grasped new marketing ideas and have taken advantage of all the publicity generated since its opening.