William Allingham, the Bard of Ballyshannon 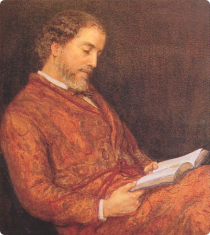 Where I was bred and born

Go where I may, I'll think of you

No account of Ballyshannon would be complete without mention of William Allingham, the "Bard of Ballyshannon." William Butler Yeats said "pleasant destiny has made him the poet of his native town, and put "The Winding Banks of Erne"* into the mouths of the ballad singers of Ballyshannon" Yeats had considerable respect for Allingham; in 1904 he contacted Allingham's widow, Helen, asking for permission to publish a selection of his poems, stating: " I sometimes believe that he was my own master in Irish verse, starting me in the way I have gone". That selection was published in 1905, and included "Let me sing of what I know", "The Fairies", "Four ducks on a pond".

William Allingham was a merchant's son. He later became manager of the local Provincial Bank. Indeed, the signature which Allingham scratched onto the glass of the bank window is still on display in a frame in what is now the Allied Irish Bank today. Later, Allingham worked in the Irish Customs, and seemed to have enjoyed travelling around the ports meeting various characters. However, from an early age he was set on becoming a poet, and frequently visited London where he shared friendships with the distinguished Victorian poets Tennyson, Carlyle, the Brownings and Dante Gabriel Rossetti. Accounts of these can be found in his diary, which opens with a chapter on Ballyshannon, beginning:

"The little old town where I was born has a voice of its own, low, solemn, persistent, humming through the air day and night, summer and winter". While in London, he met the artist Helen Allingham, 25 years his junior, whom he married in 1874. They went on to have a happily married life, with three children. Helen's illustrations appear in many of Allingham's works.

Fittingly, after he died on November 1889, an urn with his ashes was taken to the churchyard at nearby Mullinashee. He loved the view from that spot and "the wonderful cloud pictures such as I have never seen elsewhere".