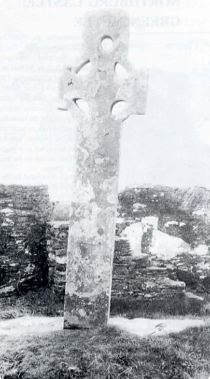 Cooley, the site of a monastery founded by St. Finian, is situated on a steep hill overlooking the town of Moville and Lough Foyle. There are several references to this monastery in the Annals of the Four Masters. In the Early Middle Ages, the monastery paid a tax of forty shillings, which indicates that it was a thriving place in the C14.

One of the most interesting buildings to be seen here is the "Skull House", a small stonestructure with a stone roof closely modelled on the beehive huts or cells of early monks. The interior is dark and windowless, with only a small door and a lintel. Until recently a large quantity of whitened bones could be seen inside. Its earlier use may have been as a storehouse for valuable objects owned by the monastery.

The monolithic High Cross is uncarved, and contains a pierced ring and a hole, suggesting it may have originally been a more ancient "hole stone". It was not unusual for St Patrick or his contemporaries to consecrate pagan shrines to ease the trauma of conversion, so possibly this cross pre-dates the ecclesiastical foundation. The site also contains the ruins of an old church and graveyard.

Map showing ancient sites, including Cooley Cross and the Skull House on the Inishowen peninsula of county Donegal

Photo of the Skull House, on an ancient monastic site, Moville, Co Donegal

Previous - Moville in the age of steam
Next - Lecamy Sweathouse