Moville in the age of steam 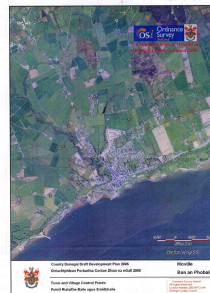 Much of the early history of Moville revolves around the sea and seafaring, thanks to the deep waters off Moville Pier, which is often, hosted the big trans-Atlantic liners.The vast majority of those who left the North West for North America departed from Moville, making their way on small tenders out to the big ships moored off the Moville coastline. This practice continued up to the start of WW1. Tenders collected passengers at Derry and ferried them to the waiting liner. Sometimes there was a fiddler on board to cheer up the departing emigrants.

During WW2, English warships anchored in Lough Foyle, opposite Moville, and crews came ashore for recreation. Local people sold goods to the sailors in exchange for items that were scarce in the region because of the war. The stone pier a short distance from the town was a port of call for ships, and local farmers exported their produce from here. Imports included coal, timber, Indian corn, flour, meal and salt. In the year 1893, 4, 900 tonnes of coal were imported through here, and 600 tonnes of salt.

Steamers sailed down the Foyle every week and small boats were rowed out to meet them, hoisting fish, eggs, poultry and butter aboard. There was a regular service from Derry to Moville on the ferry "Seamore". During the summer season, some Derry businessmen lived in Moville and made the daily return trip to their businesses in the city.

The rich maritime history of the area is also reflected in the many sea-farming people who came from the area as well as the family boat building tradition, which still flourishes in the town. Moville's heyday corresponds with that of Derry's, from the mid to the late C19th, when the town became a watering-place served from 1832 by steamers that plied up and down Lough Foyle. Moville is described in Slater's directory of 1856 as "being "sheltered from the westerly gales by the Squire's cars and the Craignamaddy mountains."

Previous - From Trondheim to Drontheim
Next - Cooley Cross and Skull House