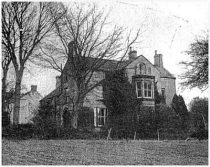 Black and white photo of New park, Moville, home of the family of Field-Marshall Bernard Montgomery. The view is of a large Victorian house with bay windows, surrounded by tall trees.

Black and white photo of New park, Moville, home of the family of Field-Marshall Bernard Montgomery. The view is of a large Victorian house with bay windows, surrounded by tall trees.

Donegal Co Library
Enlarge image
The predecessors of Field Marshall Bernard Law "Monty" Montgomery (1887-1976) were the de Montgomeri family of France, who came to England during the reign of William 1 of England, around the time of the Battle of Hastings in 1066. Further branches of the family settled in Scotland; subsequently, the C17th plantation

Coloured outline map of the Barony of Inishowen in the C17, showing the “parish of Movill”

of the nine counties of Ulster brought into Ireland all the many Irish Montgomery families, including the branch in Co Donegal.

They first settled in southwest Donegal, in the area of Killaghtee, some thirty miles from Donegal Town. In 1750, Samuel Montgomery came from there to the city of Derry, where he was a wholesale wine merchant. He married Ann Porter, from Greencastle, Co Donegal. Some years after this, he bought an estate of sixty acres at Moville for construction the family home called New Park. This was later to become the place where Bishop and Lady Montgomery, Bernard's parents lived until her death in 1949.

Samuel Law Montgomery, "Monty"'s great-grandfather, made many improvements at New Park, and in his time also Moville began to develop and grow. It was here that the future WW2 hero came during the Great War of 1914 to spend his periodical leave from the battlefront in France. 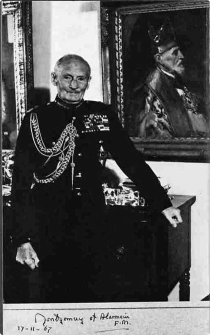 The property passed to Samuel Law's eldest son, also Samuel, who, although landlord of Moville from 1832-1874, spent very little time there. He spent thousands of pounds developing the town, which he hoped one day would emerge as a flourishing seaside town or spa. He built houses, roads, a school, the family church in the grounds of New Park, and a wharf for a steamer service on Lough Foyle.

For more information on Field-Marshall Montgomery's career go to:

Previous - Moville
Next - From Trondheim to Drontheim