Colour photograph of a view of the town of Ramelton. The view is taken from the opposite bank of the Lennon River.See this photo and more on www.ramelton.net

Colour photograph of a view of the town of Ramelton. The view is taken from the opposite bank of the Lennon River.See this photo and more on www.ramelton.net 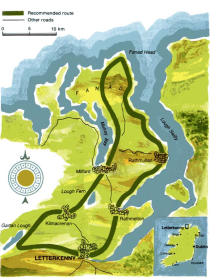 Touring map of the Fanad peninsula showing the towns, major and secondary roads from Letterkenny

Touring map of the Fanad peninsula showing the towns, major and secondary roads from Letterkenny

Ireland of the Welcomes 1991
Enlarge image

This view of Ramelton is familiar to anyone making their way up along the shores of Lough Swilly. It comes as a surprise to many visitors to find such an elegant Georgian streetscape in a county that is better known for its natural attractions.

The town was built by the same William Stewart who is credited with the establishment of the nearby town of Letterkenny. He was granted some 1,000 acres around the area where the river Lennonflows into Lough Swilly, and built the town, between 1609 and 1622, where previously an O'Donnell castle had stood, a castle judged to be "the meetest and most commodious in the area".

Ramelton is a compact settlement that nestles into the slopes of the Lennon River valley. The town is approached from the south across a relatively high plateau, which drops steeply towards the river's edge. A most striking visual feature of the town is the river and wooded northern banks that juxtapose the complex urban form of the town. Steep gradients and a varied historic urban morphology give rise to a number of interesting street patterns in which small squares and gently curved streets link public spaces. An Foras Forbartha's "Buildings of Architectural Interest in Co Donegal" states that:

"There are three elements to this remarkable town: the long sweep of Mall and Quay from the three-arched bridge towards the east, the attractive small-scale whitewashed quarter where the roads go to Aughnish and Fortstewart, and the quarter of higher ground towards the old churchyard. Good trees add to the quality…."

Within the town, urban spaces include The Mall and Gamble's Square (formal spaces laid out in the Georgian period); Market Cross and market Square (formed in the C17), and the Quays (the merchandising and trade centre of the town until the early C20.

Ramelton's "Golden Age" was, undoubtedly the 18th and early 19th centuries, the Georgian era, which gave its most attractive and distinctive buildings. This was a very prosperous time for some of the leading families of the town, such as the Watts and the Stewarts. Ships regularly traded between Ramelton, New York, and Kingston, Jamaica. Flax was grown locally for the then thriving linen industry centred on the Tanyard, a complex of buildings with a drying area, still visible near the bridge at the west end of the Mall.

The many buildings of architectural value include the Georgian "House on the Brae" on Bridge Street, the Old Meetinghouse, St Paul's Church of Ireland, and some individual houses located on or near the Mall.

The group of warehouses and industrial buildings along the quay are also notable.

More photos and information on Ramelton can be found on www.ramelton.net