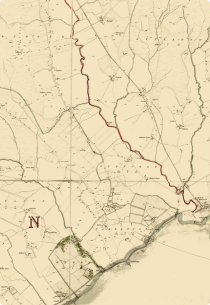 By the early 19th century, it was becoming clear to the British Parliament that Ireland's local taxation system, the "County Cess" was outdated and unusable. The County Cess was based on ancient land units called townlands. For centuries, townlands were the framework of society throughout Ireland; they were how local communities identified themselves. The main problem however was that whilst the names and limits of the townlands were reasonably well known, the exact acreage (land measurement) and consequently, the rateable value were uncertain.

In 1824 the director of the Ordnance Survey (OS) Lt. Colonel Thomas Colby was authorised by Parliament to undertake a survey of all Ireland at a scale of 6 inches to a mile as part of the planned reform of taxation. In 1825 a new government boundary department was created under the direction of Richard Griffith. Their job was to ascertain and sketch all townland, parish, barony and county boundaries and then accurately measure the acreages.

Many technical advances and innovations were developed during the 6-inch survey of Ireland, as it was the first time an entire country had been mapped at such a large scale. These advances and the quality of the engraving meant that when the maps were published between 1833 and 1846, they were arguably the most detailed, accurate and beautiful ever produced.