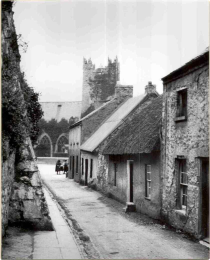 1244 The bishop of Ossory gives the Dominicans of the Black Abbey the right to draw water from St. Canice's Well, Kenny's Well, document in Corporation archives

1245 Anselm Marshall the last of William Marshall's sons dies. Leinster is divided between his five sisters. Isabelle, the widow of the Earl of Gloucester gets County Kilkenny. Their descendants, the de Clare earls of Gloucester hold Kilkenny until 1314.

1314 At the Battle of Bannockburn near Stirling in Scotland, Robert Bruce defeats the English army. Among the dead is Gilbert de Clare, Earl of Gloucester. He has no male heir, so County Kilkenny is divided among his three sisters. Eleanor gets the town of Kilkenny. Her husband is Hugh Le Despenser, and the Despensers hold Kilkenny for most of the 14th century. 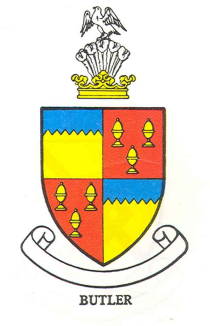 Crest and Coat of Arms of the Butler Family

Crest and Coat of Arms of the Butler Family

1329 James Butler is given the title Earl of Ormond.

1366 Lionel, Duke of Clarence holds a parliament at Kilkenny. A series of laws called the Statutes of Kilkenny are passed.

1383 King Richard II of England confirms the charters of William Marshall and his son and confirms other rights to the citizens of Kilkenny.

Previous - Conquest and Foundation
Next - The Butler Lordship