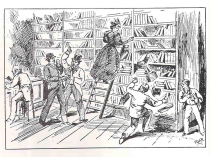 The truth about open access, frontpiece to an anonymouus pamphlet of 1895, 'The truth about giving readers free access to books in a public lending library.

The truth about open access, frontpiece to an anonymouus pamphlet of 1895, 'The truth about giving readers free access to books in a public lending library.

Kilkenny County Library stock
Enlarge image
Such attitudes meant that readers seldom had direct access to books. Usually they were stored behind the counter often in lofty book-stacks necessitating the use of ladders to retrieve the books. A book catalogue with numbers relating to the books was provided to borrowers for selection. The problem with this was that the selected items had often being issued.
In the 1880’s a solution of sorts arose. These were Library ‘indicators’. The most popular was designed in 1877 by Alfred Cotgreave then the librarian of Wednesbury. The Cotgreave Indicator was a wooden frame fitted with rows of small slots; each contained a small book like ledger held in a metal tray. Each mini-ledger referred to an actual book in the closed collection. The ends of the tray were marked with a number that was linked to the actual book. One end was blue for books in the library, the other red for those out.
Thus, when a book was in, the blue end of the tray faced towards the reader, when the book was borrowed, the tray was removed from the back of the frame, the loan was entered in the mini-ledger, this was done by entering the borrower’s number and the date, and the tray replaced with the red end towards the reader. Blue was in and Red out.

The main disadvantage of this system was the large amount of space, the actual indicators took up. It was thus useless for large libraries and indicators were usually found in small and medium sized libraries. The issuing system was cumbersome by its nature and the system was soon abandoned in favour of open access to the books by patrons.