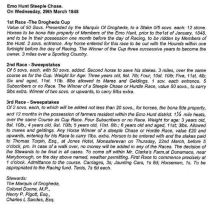 This is the racing programme of Wednesday 29th March 1848 for the Emo Hunt Steeple Chase that took place in Emo Park.

This is the racing programme of Wednesday 29th March 1848 for the Emo Hunt Steeple Chase that took place in Emo Park.

From a very early date, the Curragh in county Kildare had always enjoyed the premier position in the Irish horse racing calendar. And while one often comes across mention of horse racing on the "Great Heath of Maryborough," which was for many years the second most important flat race meeting in the country, little has been recorded of the Emo Hunt Races which were first held in March 1848.

Some of those involved in staging the Heath races decided, in the summer of 1847, that it might be a good idea to try and have a winter jump meeting which would likely appeal to members of the hunting fraternity. It appears that the Marquis of Drogheda, from Moore Abbey in Monasterevin, who was master of the Emo Hunt, not only gave the idea his full support but he also donated a silver trophy, with some cash added, for the main race of the meeting. At the time the Marquis was looked upon as one of the keenest and most influential supporters of horse racing, both here and in England.

However, while the 2nd Earl of Portarlington was a keen horseman and the kennels of the Emo Hunt were on his estate, his successor (the 3rd Earl) appears not to have supported the pack or horse racing in general. Even so, one of the Earl's agents, Mr. Kirkpatrick, entered and rode without success, "Clinker," a chestnut horse of his own, in the second race on the first day. The organising of the meeting itself was left mainly to Mr. Thomas Turpin, who lived near Maryborough, and who was also similarly involved both as secretary and treasurer of the race meetings on the Heath. The earliest mention of the Emo Hunt and its racing calendar appeared in the Leinster Express in mid-February 1848.

The Emo Hunt committee were so delighted with the response received to this notice that they decided to make it a two-day event. In doing so they created a major social event in the local calendar, with many guests staying overnight in "the big houses" and also in local hotels and inns. Wednesday's programme was restricted to members of the hunt, while the second day was open to farmers, particularly those over whose lands the hunt operated.