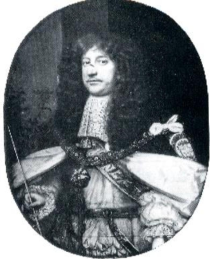 The area of Portarlington - originally a stronghold for the O'Dempseys - came into the possession of the Englishman, Henry Bennett, in 1666.

The area of Portarlington - originally a stronghold for the O'Dempseys - came into the possession of the Englishman, Henry Bennett, in 1666.

The Revocation of the Edict of Nantes occurred in 1685. The Edict guaranteed the Huguenot people freedom to practice their religion throughout France. But when the Act was repealed they became a persecuted people. This led to their exodus from France to many countries. Many came to Ireland, where they settled in various locations. A large number of them decided on Portarlington as their new home. Originally a stronghold of the O'Dempseys, the area came into the possession of an Englishman, Henry Bennett, in 1666.

He had the title of Baron Arlington - Arlington being the name of a small village that once belonged to his father's estate. When he came into possession of Cuil an tSudaire, he changed the name to Portarlington. The following year the town was made a borough as Bennett intended settling it with fellow countrymen. One of the maces of the town is still to be seen in the Goldsmith's Hall in London. However, the really distinctive part of the town's history comes some 30 years later, when the area, having being confiscated by William III after the Williamite Wars, was used to settle French Huguenot soldiers who had fought for him in Ireland. Though quite poor, these Huguenots brought over French masons and gardeners to re-build the houses and cottages that had been burnt and destroyed during the wars. 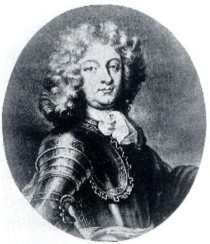 The Huguenot's patron was Henri Massue, Marquis de Ruvigny, was regarded as the leader of the French refugees in England and Ireland. He became Lord Galway, but also styled himself Baron Portarlington.

The Huguenot's patron was Henri Massue, Marquis de Ruvigny, was regarded as the leader of the French refugees in England and Ireland. He became Lord Galway, but also styled himself Baron Portarlington.

One historian says that in 1694 - the year the Huguenots were settled in Portarlington - there was no trace of buildings; no English settlers or trade of any form or of accommodation for the newcomers. After Bennett, the area was held by Sir Patric Trant, who was a supporter of King James. So the colonists had to exchange the swords for the plumbline, pruning hook and ploughshare and, in a short time, Portarlington became a little French island in the middle of Ireland.


The Huguenot's patron was Henri Massue, Marquis de Ruvigny, William's favourite and distinguished general, who after Schomberg's death at the Boyne, was regarded as the leader of the French refugees in England and Ireland. He became Lord Galway, but also styled himself Baron Portarlington.

He later became a Lord Justice of Ireland. Galway built two churches - a French Church and an English Church - together with schools for his settlers. The French Church is still in use, the English Church is now the Parochial Hall in the Square. Services were held in French until 1817 and the parish records go right back to 1694 and are a mine of information.


In later days Portarlington became famous for its schools; there being no less than 16 at one time. The most famous was Arlington (now the vacant Travel Goods factory). Another well-known school, Ecole St. Germain, was in the building now known as the East End Hotel. Of course, Portarlington was not the only place the Huguenots settled. They also lived in Dublin, Clonmel, Waterford, Cork, Carrick-on-Suir and Lisburn, for example.

This is a list of the Huguenot Ministers who served the French Church in Portarlington between 1696 and 1885.