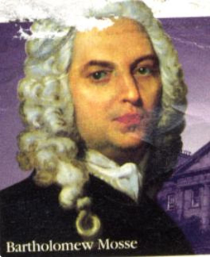 Dr. Bartholomew Mosse was born in Annefield House, Dublin Road, Portlaoise in 1712. He was the son of Rev. Thomas Mosse, Rector of Maryborough.

Dr. Bartholomew Mosse was born in Annefield House, Dublin Road, Portlaoise in 1712. He was the son of Rev. Thomas Mosse, Rector of Maryborough.

Dr. Bartholomew Mosse (1712 - 1759) is one of Portlaoise's most renowned sons. He was born in Annefield House on the Dublin Road, Portlaoise in 1712, the son of Rev. Thomas Mosse, Rector of Maryborough (Rev. Thomas Mosse came to Ireland in 1690 as the private chaplain of William of Orange: The King subsequently appointed him Rector of Maryborough).


Bartholomew studied medicine and then travelled to Minorca in charge of troops. He then studied midwifery and surgery in Europe. He returned to Dublin after his continental studies to practice midwifery and surgery. In 1742 he became licentiate in midwifery of the King's and Queen's College of Physicians. He married at the age of twenty-two in 1734 and his first wife died childless.

He remarried in October 1743. He opened the first lying-in (maternity) hospital in the British Empire in 1745 (15th March 1745 in George's Lane, Dublin). He took a lease on the Rotunda Gardens in 1748 and the foundation stone for the Rotunda Hospital was laid on 24th May 1751.


He started the project with only around Ł500 in hand, but thanks to subscriptions, parliamentary grants, concerts and lotteries the Rotunda was opened for the reception of patients in 1757. Dr. Bartholomew Mosse died, age 47, at Cullenswood on 16th February 1759 and was buried in Donnybrook, Dublin 4. The road outside St. Paul's Primary School was called Mosse's Hill after this famous man.

This commemorative plaque is situated at Annefield House, Portlaoise - the birthplace of Dr. Bartholomew Mosse. This plaque was erected by the Laois Heritage Society.

This picture shows Annefield House, the birthplace of Dr. Bartholomew Mosse - the founder of the Rotunda Hospital in Dublin.