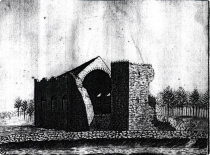 Oakvale, or Oughval, Monastery is but a short distance outside the town of Stradbally on the Carlow Road.

Oakvale, or Oughval, Monastery is but a short distance outside the town of Stradbally on the Carlow Road.

Oakvale, variously written Noghaval, Noghmald, Noghwale, Nowal, Oughaval and Ochmills (all corruptions of the Irish name, "Nuadh Conghbail" (Lit. New Habitation), is but a short distance outside the town of Stradbally on the Carlow road. Here on a spot, formerly known as Tulach Mic Comghail, adjacent to Druim an Tochair, St. Colman Mac ua Laoise founded a monastery in the 6th century. This establishment, called Nova Habitatio - in Irish, Nuadh Congbhail - gave its name to the district. St. Colman Mac ua Laoise, one of the three patron saints of Laois, was a descendant of Lughaid Laoiseach, who founded the Kingdom of Laois. He is called Mac ua Laoise to distinguish him from the many other Colmans, whose names are found in our Irish Martyrologies.

It is generally understood that St. Colman founded his monastery before the death of St. Fintan, which occurred, according to Colgan (Acta Sanctorum) in the year 560, but according to Dr. Lanigan (Irish Ecclesiastical History) in 595. We know little more about him, except that he followed the Columban Rule, and that he was styled Episcopus Lageniensis - a Bishop in Leinster. This does not mean that he was the ruler of a diocese. Rather, it suggests that he was a chorespiscopus - a bishop whose episcopal functions were confined to the monastery of which he was Abbot. There were many such chorepiscopi in the early Irish Church. We are uncertain as to the year of St. Colman's death, but we may take it for granted that he died before St. Columbcille, who departed this life in the year 597.

It is believed that the old monastery of Oakvale existed down to the 9th or 10th century, when it was destroyed by the Danes. Later it became one of the small parishes - six in all - which now form the parish of Stradbally. Much of the present ruin is that of the medieval church. It was used as a parochial church by Catholics, and after the Reformation by Protestants until the present Protestant Church was built in Stradbally in 1764. Part of that old Church was then converted into a family vault by Pole Cosby. It is now established that the Book of Leinster was formerly known as "Leabhar na Nuadhconbhala," and was connected with Oakvale in Laois. It belonged to Roger O'Moore of Ballina in 1638. This Roger was no other than the famous Rory O'Moore of the Rebellion of 1641, whose family had formerly owned Stradbally and the surrounding area. Some years ago the Institute for Advanced Studies did extensive research and proved the connection.