The Fenians, Parnell and the Land War

A new Irish nation came into being in the North America, and the American civil war saw a militarization of Irish immigrants on both the Union and Confederate sides. Passionately American though they were, a politically driven section of the hundreds of thousands of Irish emigrants organised for Irish rebellion in most of the major American cities. The life-expectancy for Irish male immigrants in the US was under five years; they worked in the most dangerous of jobs building canals and railroads, constructing engineering works dangerous and often lethal for them.   Irish migration was unusual by European standards in the number of single women who emigrated alone or in familial chains- most of them to become domestic servants or ‘Biddies’ , if harsher conditions did not ruin them. They lived in Irish urban ghettoes in the main- the Five Bells area of New York was full of former tenants of the Kerry Lansdowne estates.

In the late 1850’s a convergence of a series of small movements, initially drawing on the Emmet Monument Association in New York and a medley of other small groups became known in Ireland as the Irish Republican Brotherhood and in America as the Fenians or Clan na nGael. Drawing on the Fianna saga popularised through antiquarian, scholarly and patriotic writings they took the Fenian name, and added to it the image of the Skibbereen Phoenix Society, the resurgent phoenix emergent from its own ashes; for them a symbol of resurgent Irish republicanism. Facilitated by American arming, fenianism staged a series of attacks on Canada and an unsuccessful uprising in Ireland in 1867. The nature of fenianism is still subject to scholarly disagreement- a mass movement that was recreational, or a mass revolutionary body? It was clearly a mass movement ,and its cadres of activists- James Stephens, Jeremiah O’ Donovan Rossa

Jeremiah O'Donovan Rossa was a Fenian leader and a member of the Irish Republican Brotherhood. He was accused of planning a Fenian Rising in 1865 and subsequently imprisoned for eight years. O'Donovan Rossa died in New York in 1915.

, John Devoy, Charles Kickham, John O’ Leary and countless others, set the agenda for ‘advanced’ nationalism in Ireland and America for the next half-century. Through the structures of police observation to which the Irish population were subject at the time, evident now in Royal Irish Constabulary archives, we have access to aspects of their movements at the time. Anti-clerical, republican, conscious of the desire to be freemen in a free polity, it is their iconic moments that had political effect; the Amnesty campaigns, the Manchester martyrs, the Paris exiles. Through their own paper The Irish People and other sympathetic newspapers owned in the 1860’s and 70’s by Richard Pigott, their ethos and exploits reached a wide audience. Photographs of hundreds of young fenians gaze now from police records, palimpsests of lives few of whom we can reconstruct. 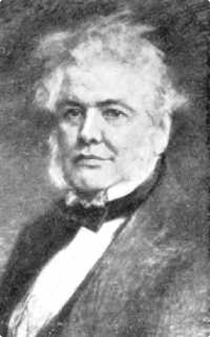 The Amnesty campaign, to free fenian prisoners, brought the Donegal barrister and occasional Trinity College don, Isaac Butt to the centre of active politics, and fenianism brought British attention to Ireland, leading Gladstone to disestablish the Church of Ireland in 1869 and to legislate for greater security for Irish tenants in his Land Bill of 1870. These were not fenian demands, but the attention that fenianism brought to Irish affairs lead Gladstone to see these reforms as necessary. 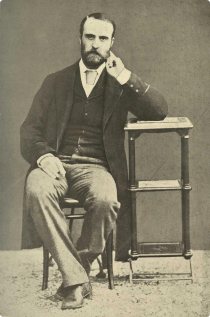 The demand for an Irish parliament within the empire was rearticulated in the 1870’s through the Home Government Association, under the leadership of Butt. This set the stage for the crucible decade in the formation of modern Ireland-the 1880’s. Charles Stewart Parnell, a Protestant Wicklow landlord succeeded Butt as leader of what became the Home Rule movement. Under his leadership an alliance of three formerly disparate strands in Irish politics came together in what came to be called ‘the New Departure’. Fenians were clearly incapable of achieving the republic they sought by force of arms, the agenda of agrarian politics had shifted, and the parliamentary Home Rule movement seemed stymied at Westminster. By converging the land and Home Rule issues under the political instincts of the former fenian prisoner Michael Davitt, and by binding the key leaders of fenianism in the United States into a new alliance, political agendas were transformed.

Courtesy of the National Library of Ireland
Enlarge image


Agricultural depression occurred all over Europe in 1879 and 1880. In the marginal economy counties of the west of Ireland depression could mean eviction through inability to pay rent, the threat of losing land, status and a foothold in the country. Widespread rural protest at this frustration of what had appeared to be increasing prosperity galvanised Mayo in particular. 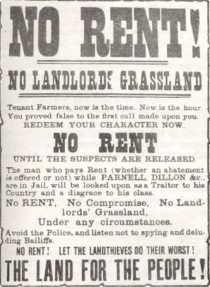 The Land League of Mayo became the Irish National Land League and the protests against existing rent- levels in a depression gathered momentum, spreading throughout the country. The Home Rule and Land League coalition was a broad-based movement encompassing tenants of tiny holdings of under five acres in the west and large wealthy tenant farmers in Ulster , in the east and in the midlands, skilfully directed by Parnell towards the prize of Home Rule.

The Land War polarised landlord tenant relations for all time and lead through complex routes to a peasant proprietorship by the early twentieth century. The Reform Bills of 1884 and 1885 substantially increased the franchise, and divided Ireland into bitterly opposing camps – Home Rule and Unionist.   This set the agenda for the following century. Mutual vilification marked these two positions and the first-past-the post system effectively disenfranchised local minorities. Parnell’s fall, through the divorce case and the split, confirmed irrevocably the stasis in which the goal of Home Rule languished from the time of the Tory decision to oppose it tout court in 1886. Perhaps if Parnell had lived creative ways could have been found out of the paralysis of Home Rule’s abject dependence on unwilling Liberal support, or perhaps the divided strategies of Dillon, Healy and Redmond were as good as the political logistics would allow. Regardless of outcomes, the ‘years of the locust’ for Irish unionists, did not end with the Promised Land for Irish Home Rulers. This decade was one of polarisation through democratization.