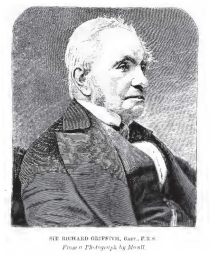 Richard John Griffith was born in Hume St. , Dublin on September 20 1784 , son of Richard Griffith of Millicent in Clane, Co. Kildare, who was descended from a branch of the Griffith family of Penrhyn, near Bangor in Gwynedd, Wales .   He was baptised in St. Peter’s Church in Aungier Street on October 11. A transcript of Griffith's baptism is available online.

After a brief commission in the Royal Irish Artillery in 1799, he moved to London to study civil engineering and mining, and became fascinated by the newly important science of geology, visiting and analysing the geology of various areas in England , Scotland and Wales . He completed his studies in Edinburgh , where he was elected a Fellow of the Royal Society of Edinburgh in 1807. In 1808 he returned to Ireland , where he was commissioned by the Royal Dublin Society to carry out a study of the Leinster Coalfield. He was appointed Engineer to the Bog Commissioners in 1809 and over the following four years wrote detailed accounts of the geology of various parts of the country, including Clare, Cork , Kerry, Leitrim, Mayo, Sligo and Wicklow. He continued to accumulate official appointments, becoming Professor of Geology and Mining at the Royal Dublin Society in 1812, Inspector-General of His Majesty's Royal Mines in Ireland at about the same time and Engineer of public works in Cork Kerry and Limerick in 1822. The first edition of his Geological Map of Ireland was published in 1815. This was revised and republished a number of times over the following 40 years, and came to be the work he would think of as his life’s major achievement.

The appointment that eventually led to the Valuation was as Boundary Commissioner in 1824. This oversaw the precise fixing of townland boundaries, laying out in exact lines the edges of areas that had long been fluid or traditional, and omitting many older place names in the process: one flawed aspect of Griffith’s method was undoubtedly the way in which names used by the gentry, often English-language and recent, were preferred to traditional names used by the peasantry. In any case, exact boundaries were a prerequisite to the detailed mapping of Ireland to be carried out by the Ordnance Survey, which was itself a necessary preliminary to any accurate valuation. The connections between naming, mapping and valuing were clear to the government of the day, and were made explicit when Griffith was appointed Commissioner for the General Survey and Valuation of Rateable Property in Ireland in 1827, following the Valuation Act of 1826, an Act which he was involved in drafting. He held this position for the following 41 years, until 1868. Over the course of this period he was also involved in public works on the Shannon , the erection of what are now the National Gallery and National Museum and the rebuilding of the Royal Barracks in Dublin (now Collins Barracks, part of the National Museum ). He became Chairman of the Board of Works in 1850.

Griffith married Maria Jane, daughter of George Waldie, in 1812 and had four children, George Richard, Elizabeth Jane, Charlotte Jane and Anna Maria. He was created a baronet in 1858 in recognition of his contribution to public service and died in 1878, aged 94.

By all accounts Griffith did not suffer fools gladly, or indeed at all. The smallest deviation from his instructions would result in instant dismissal. In this he may simply have been a product of his age. He was certainly authoritarian and demanding, but he achieved extraordinary administrative success in the midst of the most catastrophic era in Ireland ’s history.

Previous - Why is Griffith’s important for Irish genealogy?
Back to