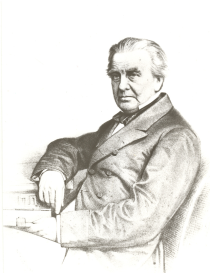 Charles Blacker Vignoles, civil engineer, was born on 31st May, 1793 at Woodbrook near Enniscorthy in Co.Wexford, the only son of Charles Henry Vignoles.

Around 1807, Vignoles was articled to a law firm, but at the age of 19, was sent to the Military Academy at Sandhurst under the care of Professor Leybourne. The following year, he saw active service at the Battle of Vittoria and later received a commission in the Royal Scots. After a spell of duty in Canada, Vignoles was sent to FortWilliam in Scotland and from there in May 1816 to Spain. He married Mary Griffith in 1817, went on half pay from the army, and sailed alone for South Carolina, where he carried out surveys and produced an account of the Dominion of Florida, accompanied by a highly acclaimed map.

Returning to England in May 1823, he was engaged in railway surveys, including the route over Chat Moss of the proposed Liverpool and Manchester Railway and was in charge of construction of the line until 1827.

In 1830, in conjunction with John Ericsson, Vignoles devised a method of working railways up steep inclines by introducing, in the centre of the road, a third rail, which was nipped by two horizontal rollers actuated by a lever from the locomotive. This centre-rail system was essentially the same as that afterwards employed for the line over the Mont Cenis pass in Switzerland, but advances in mechanical engineering proceeded rapidly to the point where main-line locomotives were able to cope with any reasonable incline.

The subsequent professional career of Charles Blacker Vignoles included many achievements, including being given credit for the invention of the eponymous 'Vignoles Rail', although it seems more likely that he introduced it to Europe from the USA). He was responsible for the design and supervision of the construction of the first passenger railway in Ireland (the Dublin & Kingstown) and numerous other railways in Europe and South America. He also constructed a large suspension bridge over the River Vistula at Kiev in Russia.