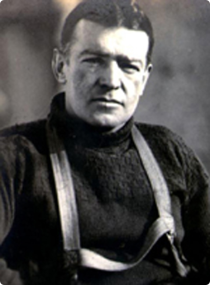 Ernest Henry Shackleton, antarctic explorer, the son of an Irish doctor was born in Kilkea House, Co. Kildare, but at age 11 the family went to live in England. At the age of 16, he signed on to the Merchant Navy, and won steady promotion, becoming Third Officer on a liner at the age of 27.

He was accepted to join Scott's expedition to Antarctica in 1901, but the attempt failed. In 1906, his own expedition got closer to the South Pole than anyone else, and he returned a hero. Shackleton received a Knighthood in 1909. In March 1914, Shackleton set out to cross Antarctica via the South Pole. His ship, the Endurance, became trapped in ice in the Weddell Sea, and drifted for ten months, before being crushed in October 1915.

The expedition reached Elephant Island in 1916, from where Shackleton, with five men, made an 800-mile journey in a small boat, to South Georgia. The mountains of South Georgia had to be crossed on foot to reach the whaling station on the far side of the island. After three unsuccessful attempts to rescue his men, the fourth attempt was successful.

On returning to England, he went as an army officer to Northern Russia to serve in the war effort. In 1921, he set out on another Antarctic expedition, but died of a heart attack on South Georgia, where he is buried.