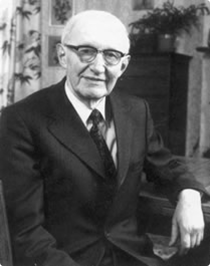 Ernest Walton was born in Abbeyside, Dungarvan, County Waterford. From school in the North of Ireland he won a scholarship to Trinity College Dublin to study science. His first distinction was that of a double first class honours degree (1926) in Physics and Mathematics and was awarded a Gold Medal.

After gaining an M.Sc degree, also from the University of Dublin, Walton won a research scholarship to work with Ernest Rutherford at the Cavandish Laboratory in Cambridge. Along with another research student, John Cockcroft, he designed and built a machine in which a very high D.C. voltage was generated using a voltage multiplying circuit, which they invented. With only scarce resources and the lack of the laboratory apparatus that today is taken for granted, this was an extremely difficult task and it required great ingenuity and experimental skill. However, with their apparatus, they were to "split the atom" in 1932, and also to verify experimentally Einstein's E=mc2 formula. For this they received the Nobel Prize in Physics. Walton is the only Irish person to have received a Nobel Prize for science.

Walton returned to Trinity College Dublin in 1947 as Professor of Physics, a post he held until his retirement in 1974. He was awarded the Hughes Medal of the Royal Society, and received honorary degrees from Queen's University Belfast, Dublin City University and the University of Ulster.