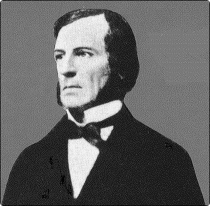 George Boole was born in Lincoln in 1815. He married Mary Everest, a niece of George Everest, after whom Mount Everest is named.

Despite being self-taught, with little formal education, he was appointed the first Professor of Mathematics at Queen's College (now University College) Cork. In Cork he wrote The Laws of Thought, which earned him the title 'Father of Symbolic Logic' and which contains the mathematics for today's computer systems.

Many of the mathematical topics taught in schools today, including set theory, probability and binary numbers, can be traced back to Boole. He also invented a branch of mathematics called invariant theory, which made a contribution to operator theory and differential equations.