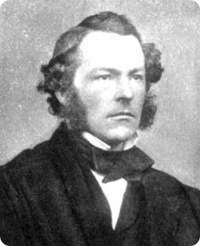 George Gabriel Stokes was born at Skreen, County Sligo in 1819. He was educated at Pembroke College, Cambridge, where he was Senior Wrangler (placed first in mathematics in the whole university) and became a Fellow of the College in 1841.

Stokes' main work was on the passage of waves through different media and the transformations they undergo. His research revolutionised hydrodynamics. He also contributed to the undulatory theory of light.

Stokes became Lucasian Professor of Mathematics in 1849, a post also held by Sir Isaac Newton and by Stephen Hawking. Stokes was Secretary and President of the Royal Society and was made a Baronet in 1889.