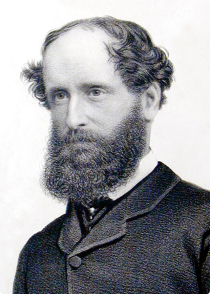 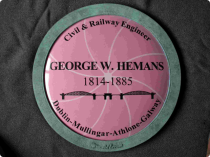 George Hemans early education was undertaken by his mother at St Asaph. Hemans was placed as a pupil with Sir John Macneill at his London office and was employed on surveys of several lines of projected railway, both in Scotland and in Ireland.

Around 1840, Macneill appointed Hemans as Resident Engineer on the Dublin & Drogheda Railway (D&DR) and entrusted to him the complete works, including the erection of lreland's first major wrought-iron lattice girder railway bridge over the RoyalCanal in Dublin. Following the opening of the D&DR in 1844, Hemans worked for Macneill on the Dublin & Cashel railway, part of the Great Southern & Western Railway (GS&WR) main line between Dublin and Cork.

In August 1845, he was appointed Chief Engineer to the Midland Great Western Railway of Ireland (MGWR) and was responsible for the design and supervision of construction of the main line from Dublin to Galway, including the major bridge crossing of the Shannon. The section from Enfield to Mullingar caused considerable difficulties, constructed as it was across deep bog in order to avoid the severe curves of the Royal Canal. Hemans overcame the problems with innovative engineering, literally laying the foundations for the design of both road and rail transportation routes across the bogs of the midlands and west of Ireland.

In 1854, Hemans moved to London and rapidly attained a deserved reputation as a parliamentary engineer, planning several railway routes. Jointly with John Frederic La Trobe Bateman, Hemans prepared plans for the utilization of London's sewage. These works were actually commenced, but due to the financial crash of 1866 and the ensuing depression, the project was abandoned.

Railway work having declined in Britain and Ireland, Hemans sought work abroad. In 1870 he was appointed Engineer-in-Chief for the Province of Canterbury in New Zealand, and subsequently, to the New Zealand Government. However, in 1872, he suffered a severe stroke that left him paralysed and incapable of speech or writing for the rest of his life.

Hemans served as President of the ICEI in 1856-7, being the first to deliver a presidential address. He died on 29 December 1885 at 11 RolandGardens, Brompton, London.