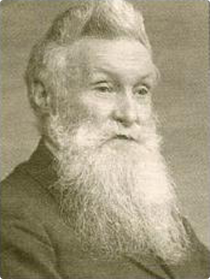 John B. Dunlop introduced the idea of using air-filled tyres instead of solid rubber ones to make bicycle travel more comfortable.

John B. Dunlop introduced the idea of using air-filled tyres instead of solid rubber ones to make bicycle travel more comfortable.

Dunlop was born in Ayrshire in Scotland and in the local parish school proved to be keen and diligent and became a pupil teacher. He pursued his studies at Irvine Academy and qualified as a veterinary surgeon at the age of 19. Moving to Ireland, he set up a successful and extensive practice in Belfast, with a dispensary and twelve horseshoers.

Dunlop was always interested in practical problems. At the time, bicycles of a more efficient design were becoming popular, but they had solid rubber tyres and travel on them could be pretty uncomfortable. He decided that replacing the solid tyre with an air-filled one would solve the problem. He made a tube from sheet rubber and inflated it with his son's football pump. Two of these on his son's bicycle proved successful, and in a cycle race in 1889, the bicycle with pneumatic tyres won, an event that was to revolutionise road transport. Dunlop subsequently went to live in Dublin where he died at the age of 81.