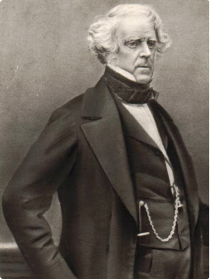 John Macneill was appointed engineer-in-chief to many projects in Ireland including plans for 800 miles of railway.

John Macneill was appointed engineer-in-chief to many projects in Ireland including plans for 800 miles of railway.

Sir John Benjamin Macneill was born at Mount Pleasant near Dundalk, County Louth. He trained as a military engineer but then changed to civil engineering. His first employment was to survey the coast of Ireland with Alexander Nimmo. He was involved in road building and built roads between Dundalk and Newry and between Dundalk and Dunleer. He went to England and worked with Telford for ten years on the London to Holyhead road and on Telford's death; he was appointed Engineer-in-Chief on the Holyhead road.

Macneill became interested in railways and was appointed engineer-in-chief to many projects in Ireland including plans for 800 miles of railway. His railway works include the Boyne Viaduct, the Craigmore viaduct and the Cork railway tunnel. The Board of Trinity College Dublin Founded the School of Engineering in 1841 and Macneill was appointed to the first holder of the Chair of Civil Engineering, which he held for ten years.

As an industrialist, Macneill set up a flax-manufacturing factory, which by 1851 employed 300 people. In 1857 a fire destroyed the uninsured facility prompting Macneill to sell up and move to London, where he died in 1880 and was buried in Brompton cemetery.

Macneill received an honourary LL.D. from the University of Dublin and was a member of the Royal Society.