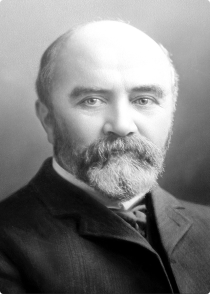 John Purser Griffith, civil engineer, was born on the 5th October, 1848, at Holyhead, North Wales, the only son of William Griffith and Alicia Evans. He was educated at Trinity College, Dublin, where he was awarded his Diploma in Civil Engineering in 1868.

In 1871, he became Assistant to Bindon Blood Stoney at Dublin Port, becoming Chief Engineer in 1898. He achievement at DublinPort included the deepening of the approaches to the quays, many of which were rebuilt. Following retirement in 1913, he worked as a consulting engineer.

He was President of the Institution of Civil Engineers of Ireland in 1887-1889 and of the Institution of Civil Engineers in 1919-20 and was elected a Commissioner of Irish Lights in 1913 and Senator of the Irish Free State in 1922. Purser Griffith was a member of the Royal Commission on Canals and Waterways, 1906-1911. He was involved with the Leinster Carbonising Co., about 1909, which hoped to develop on a large-scale, the production of power from peat with recovery of products of tar, and of fertilisers. For many years, he carried out at his own expense industrial research into the economics of the peat resources of Ireland. He was Chairman of the Irish Peat Committee in 1917-18, Member of the Commission on the Water Power Resource of the United Kingdom in 1918, and Chairman of the Water Power Resource of Ireland Sub-Committee, 1919-21.

He was knighted in 1911, and became Vice-president of Royal Dublin Society in 1922. He also served as Honorary Professor of Harbour Engineering in Trinity College, Dublin, and received the Hon. Degree of M.A.I. from the University of Dublin in 1914.

In 1923 he interested himself in the project for developing the hydro-electric possibilities of the River Liffey, and having obtained Parliamentary Powers, handed over the whole scheme to the state, as the more ambitious Shannon Power Development had, at the time, rendered the development of the Liffey unnecessary.