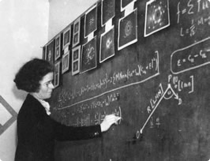 Kathleen Lonsdale, crystallographer, was born in Newbridge, County Kildare in 1903. She studied science in Bedford College for Women and came first in the honours B.Sc. exam in 1922.

After graduation, Lonsdale joined William Bragg's team where she worked on the X-ray diffraction of organic molecules. On her marriage, she moved to Leeds and there showed that the benzene ring is flat as a result of her analysis of hexamethylbenzene.

As a Quaker and a pacifist Lonsdale was imprisoned during the Second World War for refusing to register for civil defence duties. After the war, she became a Reader in University College London and was subsequently appointed Professor of Chemistry in that College (1949-1968). She edited three volumes of International Tables for X-ray Crystallography (1952,1959,1962).