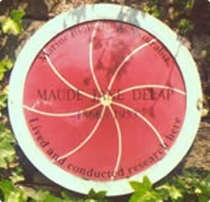 Maude Delap was born at Templecrone Rectory, County Donegal , the seventh of ten children born to the Rev Alexander Delap. In 1874 the family moved to Valentia, a small island off the Kerry coast. Maude was an exemplar of the doughty and self-taught female Victorian field biologist. In Valentia she maintained a laboratory in her home. She spent almost all her life studying the marine life of the rock pools and shoreline of the Valentia area. Like many other naturalists of the time, she was also interested in archaeology, folklore, botany and zoology.

Donegal-born Maude Delap maintained a laboratory in her home in Valentia, where she did much significant marine work.

Donegal-born Maude Delap maintained a laboratory in her home in Valentia, where she did much significant marine work.

Despite her father’s liberal leanings, Maude received little formal education. In a large family of six sisters and four brothers, only the male members had to be educated at all costs so that they ‘made good careers’. Although they had the benefit of a good primary schoolmaster in Valentia, the six sisters were mostly educated at home. Few middleclass ladies (particularly clergymen’s daughters) of the time were educated or trained for employment and when Maude was offered a position in the Marine Biological Station at Plymouth in 1906 her father’s reaction was ‘No daughter of mine will leave home, except as a married woman’.

Maude Delap was a keen collector of the local marine fauna and supplied many specimens for the Natural History Museum in Dublin, where some of them are still on display. In addition to supplying museum specimens, she also conducted rearing experiments on jellyfish in seawater aquaria. She made major contributions to untangling the complex life cycles of these organisms, particularly between the medusa and hydra stages. Unusual for females of the time, she published a series of significant scientific articles and notes (particularly in the Irish Naturalist) solely under her own name in the early 20th century.

Although located in the remote south-west of Ireland , Valentia Island was nevertheless well-connected with the wider world via the staff of its transatlantic telegraph station, weather station and observatory. In the late 1890s it was chosen as the site for a detailed marine study, partly on the basis of work already carried out by Delap family members. The study was led by Edward T Browne of University College London and involved eight other British naturalists, in addition to Maude and Constance Delap. The results of the survey comprised 188 pages of scientific papers in the Proceedings of the Royal Irish Academy.

Maude’s scientific work was acknowledged in 1928 when a sea anemone, Edwardsia delapiae, was named after her. She had first discovered this creature burrowing in eelgrass (Zostera) on the shores of Valentia Island but it has not been recorded since. She was made an associate of the Linnean Society ( London ) in 1936. A commemorative plaque has also been erected in her honour in Valentia.