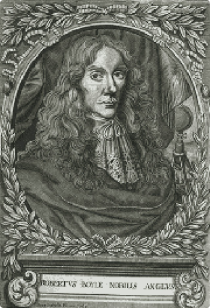 Robert Boyle was born in Co. Waterford in 1627. Boyle's Law states that for a fixed amount of gas kept at a fixed temperature, P and V are inversely proportional.

Robert Boyle was born in Co. Waterford in 1627. Boyle's Law states that for a fixed amount of gas kept at a fixed temperature, P and V are inversely proportional.

Robert Boyle was born in Lismore Castle, Co. Waterford. He was the fourteenth child and seventh son of the Richard Boyle, one of the principal English colonisers of Munster. An intellectual prodigy, he was educated first at Eton College, then by a private tutor led tour through Europe, where he studied the works of Galileo and Descartes. He settled in Oxford in 1654 and quickly embraced the New Philosophy, which emanated from the work of Francis Bacon, which put its emphasis on experiment and reasoned argument rather than on the given authority of the ancient philosophers.

Inspired by the work of Guericke on the nature of vacuum, he devised an air pump of his own but its successful construction relied heavily on the practical genius of his assistant, Robert Hooke. His important work on gases followed; his finding that air was compressible led him to formulate the scientific law V µ 1/P, which probably was the most widely known by the general public until the advent of Einstein's E = mc2.

As Boyle's Law implies that gases must consist of particles in a free space capable of being pushed together, it was instrumental in bringing about the idea of matter being made up of discrete entities or 'atoms'. However it took another 140 years before 'atomism' became the basis of the accepted structure of matter, which allowed chemistry to move forward into more or less the form in which it is viewed today.

Boyle suffered a good deal of ill health from an early age. He also was somewhat of a hypochondriac and a fear of his own mortality turned his mind to religion and much of his writings is on theology. While because of his place of birth he may be regarded as an Irish scientist he did most of his scientific work in Oxford and London. His views on Ireland as a place for science were expressed in 1653 when he wrote in a letter 'a barbarous country, where chemical spirits were so misunderstood and chemical instruments so unprocurable, that it is hard to have any Hermetic thoughts in it'. However he did lend encouragement to scientists in Ireland by helping them to establish the Dublin Philosophical Society in 1683, the first truly scientific society in Ireland.