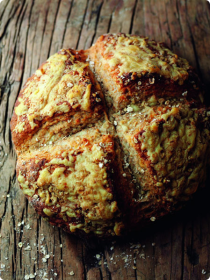 A loaf of traditional soda bread.

A loaf of traditional soda bread.

Soda bread, although the cornerstone of traditional Irish baking, was not invented by the Irish but by the indigenous people of the Americas. It is a relatively new type of bread and has only been baked since the advent of soda in the first half of the 19th century. Before that time, many different ingredients were used to make bread rise, including fermented potato juice, sourdough or beer.

White soda bread is commonly known as cake bread and was originally baked in a pot oven over the hearth. Nowadays however, it is the nutty, coarse texture of brown soda that is considered the exemplary Irish bread.

Eggs were a luxury item in the olden days. As well as being used in baking, they were often used as a source of barter for other commodities. Although Ireland was extremely impoverished during the famine, butter continued to be exported to pay for the rent of many Irish homes.

With respect to breads and baking, there are many regional variations. Waterford is well known for its ‘blaas’; a particular type of floured bread unique to the area. The Dublin ‘Gur Cake’ (or ‘Cork Donkey’s Gunge’) is a cake recipe invented by clever commercial bakeries as a way of using up any leftover breads and cakes. The leftovers were sandwiched together between layers of pastry.

The bread provided with a traditional Irish breakfast is another type that can vary from region to region. No Ulster fry is complete without a soda farl that would have been cooked on top of the stove!