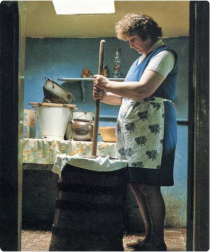 Mary starting the weekly butter churning, using the dash-churn owned by her mother.

Mary starting the weekly butter churning, using the dash-churn owned by her mother.

Butter making was seen as both an art and a necessity for many years, and to some extent, it still is. Many houses kept a few cows and it normally fell on the woman of the house to make the butter. This process took a couple of days between skimming, churning and shaping. The butter was then used by the family and the rest was used as a source of barter for other requisites in local shops.

Dairy products make up a large proportion of our diet in Ireland and are used for much of our daily requirements. Fish, and shellfish in particular, is best when it is simply cooked and/or served with butter. Much of the baked and steamed puddings, common in the past, were predominantly made up of milk, butter and cream - ingredients which were readily available to the farmer and which created rich milk puddings to satisfy a hungry family.

Butter making is fast becoming an extinct art in rural Ireland due to a number of factors, most noticeably the increasingly stringent food safety regulations. Producers are no longer allowed to make the butter using unpasteurized milk and a way of life, preferred by previous generations, is becoming obsolete.

Cheese is, of course, another very popular industry today. In the early part of the 20th century, cheese-making was generally confined to large-scale factory production, with a few exceptions. During the 1970s, there was a surge in interest in cheese-making among dairy farmers and the industry began to grow. Today, there are a large number of very high quality cheese makers, making delicious cheese for retail purposes in supermarkets and on the farmers’ market circuit.