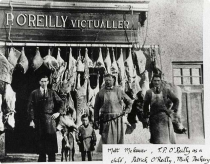 Bronze and Iron Age excavations at Dún Ailinne, Co. Kildare, have revealed a strong presence of animal bones. This suggests that Ireland has had a long tradition with animals. With respect to beef, the study suggests that the cattle were kept and reared primarily for their milk, rather than their meat. The size of a person’s herd was also an indication of their wealth, so only old animals would be slaughtered, butchered and sold, or used as meat.

Due to the lack of feed during the winter months, old cattle were often slaughtered and their meat preserved for future use. This was described under Brehon Law as ‘winter food’. Today, beef and lamb continue to be very popular among meat eaters, while pork and bacon are still regarded as the cheaper alternatives.

In earlier generations, pork was often salted in order to preserve it. As salt was such a rare commodity, salted meat tended to have a higher value when it came to barter or exchange. Cattle were bled for the production of pudding, which could also be stored throughout the winter months. No formal banquet was complete without a whole roasted pig - a tradition which has become very popular again in modern-day Ireland at barbecues, family events and post-wedding entertaining.

Ireland boasts lush green pastures, which are wonderful for rearing cattle. Coupled with the rich quality of the land, our fresh air and rainfall levels make cattle-rearing practically idyllic.

Historically, cattle were reared for their milk, and sheep for their wool, with the meat being reserved for more formal banquets and elaborate celebrations. A person’s place in society was determined by the cut of meat they served at their banquets.

Animal husbandry was, and still is, a very important activity in Ireland. Although society has moved on considerably since the Pre-Christian era, the number of cows a farmer owns, still depicts affluence and status.

Many cooking methods can be applied to meat and different cuts tend to suit the different culinary processes. Though sometimes perceived as a traditional UK dish, many Irish homes retain the tradition of enjoying a roast beef for Sunday lunch. Top side or silverside of beef would be cooked more commonly in a pot-roast manner to aid tenderisation, while prime cuts of beef or lamb are often simply pan-fried.

Due to the fat content in most meat, it is particularly suited to barbecuing and can be very successfully teamed with a variety of both strong and mild flavoured marinades.

Irish stew is perhaps the most quintessentially Irish dish there is, and is enjoyed on lunch menus in bars and restaurants all over the country. Fillet beef is a very popular option, both at home and in a restaurant; it is seen to suggest richness and indulgence, just as it did in previous generations.