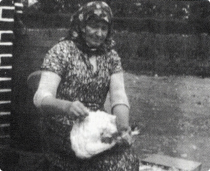 This photo was taken in the 1930s at a farm in Thurlesbeg, Co. Tipperary. It shows a woman plucking a chicken, in preparation for cooking.

This photo was taken in the 1930s at a farm in Thurlesbeg, Co. Tipperary. It shows a woman plucking a chicken, in preparation for cooking.

Poultry and game have a long tradition in Ireland and, with the increase in people rearing their own chickens, they have become more popular than ever.

For many years, poultry was used as a source of payment. It was a tool for barter with local shopkeepers and businesses. A chicken was often exchanged for part of the weekly shopping, medical services or entertainment admission.

Game is less popular than poultry, but for those who enjoy it, it is considered a luxury. However, it is much less of a luxury than it was for our hunter/gatherer ancestors who ate it as a regular commodity!

The expanse of woodlands, boglands and inland waterways of Ireland have provided ideal nesting grounds for all manner of wild fowl for centuries.

A particularly interesting bird in the history of Irish traditional food is the Barnacle Goose. For centuries, the breeding habits of this species remained a mystery and the medieval monks of Ireland came up with their own theories on its origin. One such theory linked the bird to a shellfish species called the ‘Goose Barnacle’. The monks believed there was a vague resemblance between the two species. It was believed that these shellfish barnacles were the developing young of the Barnacle Goose, and that it could then be considered as a species of fish rather than fowl. This theory settled, the monks reasoned that Barnacle Goose could be eaten on fast days and during the Christian Lenten period of abstinence when fish was the staple food!

In the not too distant past, many families were reared on inexpensive boiled rabbits and rabbit soup, a weekly staple in many homes. Rabbit, as well as pheasant and duck, was particularly popular for country people as they were easily acquired in the wild. Nowadays, restaurant menus can command a high price for these delicacies. Food trends, just like fashion and music, tend to move in a full circle.

There has been much discourse about poultry farming in recent years, in relation to the varying methods of production including free range or organic production, or intensive chicken rearing. At home, we keep a small number of chickens and use them for fresh eggs. Our chickens are reared in the free range manner, whereby they are free to roam around our gardens and can engage in natural chicken behaviour such as pecking, scratching and foraging. Exercise outdoors strengthens their legs, increases their heart rate, and makes for a healthier chicken in general. Free range chickens also have constant access to natural light which is essential for good quality of life. On a whole, intensive rearing is less popular, particularly among animal activists and the more discerning shopper. This is due to both the poor quality of life for the chicken, and invariably the quality, or lack thereof, of the chicken itself.