The Rock of Cashel

Rock of Cashel from South. Rising abruptly to 300 feet is a conspicuous object for many miles

Rock of Cashel from South. Rising abruptly to 300 feet is a conspicuous object for many miles

An image of the Rock of Cashel is something that every Tipperary person, and others from further afield, will always hold in their memory. The monument's vivid history is reflected in the magnificence of its' buildings' architecture, and today it hosts 250,000 visitors per year. In the past, however, it was not tourists that flocked to the Rock, but kings, archbishops, soldiers and pilgrims.

The Rock comprises of five buildings, the oldest of which, the Round Tower, dates from the early 12th Century. The outstanding Romanesque chapel, named after King Cormac, dates from the same period, while construction on the largest building on the site, the Cathedral, began in the 1290s. Archbishop Richard O'Hedian, in the 15th Century built the Vicar's Choral which housed his choir; he also fortified the Cathedral and built his Palace onto its nave. 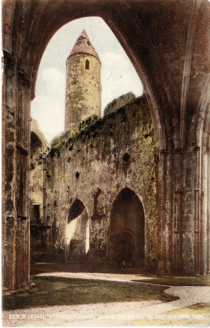 View of the Round Tower, through the gothic arch of the Cathedral's northern transept

View of the Round Tower, through the gothic arch of the Cathedral's northern transept

The Cathedral - Site of Murder and Infamy

The Cathedral has been the site of bloodshed and violence on more than one occasion through the ages. In 1491 Gearóid Mór Fitzgerald torched it, and it was in the Cathedral that the townsfolk sought refuge from "Murrough of the Burnings" in 1647. It failed to protect them, however, and Inchiquin would later claim that all the refugees on the Rock, save one, died during his assault. That sole survivor died of his wounds soon after. The Cathedral's choir is the final resting place of Archbishop Miler McGrath, known to history as "the Scoundrel of Cashel". He gained his nickname for having switched from Catholicism to Protestantism (and possibly back again), and his tomb inscription carries the wise warning "Let he who stands, take care lest he fall".

The Rock has always been a focal point of celebration, in modern times as well as ancient. The Catholic Emancipation Centenary Celebration took place there in June 1929, and mass was then celebrated on the Rock for the first time in 300 years. The famous voice of Count John McCormack was among those that once again made the famous walls of the Rock ring in song. More recently, in 1996, the Cathedral was host to Suzanne Murphy, Finbar Wright and the Irish Chamber Orchestra.

Cormac's Chapel, as viewed from the Eastern side of the Rock

The Rock of Cashel from Dublin Road

View of the Rock of Cashel from the Dublin road

The Rock of Cashel from Dublin Road -