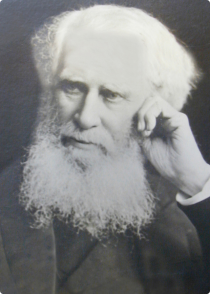 Bindon Blood Stoney was born in County Offaly on 13 June 1828, the second son of George Stoney and Anne, daughter of Bindon Blood of Cranagher and Rockforest, County Clare. Bindon studied at Trinity College Dublin and received a Diploma in Civil Engineering in 1850.

In 1853, Stoney became Resident Engineer under James Barton on the Boyne Viaduct. Stoney's connection with its construction encouraged him in later years to write his classical work on 'The Theory of Strains in Girders and Similar Structures', which gave practical methods for calculating the strains occurring in girders, becoming a standard reference work for structural designers.

In 1856, Stoney was appointed Assistant Engineer to the Dublin Ballast Board and in 1859 Executive Engineer, becoming Chief Engineer at Dublin Port in 1867 following the establishment of the Dublin Port & Docks Board.

He designed large dredging plant and rebuilt nearly 7,000ft of quay walls along both north and south banks of the River Liffey, replacing the tidal berths by deepwater berths. In addition to this, the northern quays were extended eastward and the formation of Alexandra Basin commenced in 1871 and partially completed by 1885.

To avoid the necessity of costly cofferdams and pumping, he formed the lower sections of the deep-water quay walls of monolithic concrete masonry blocks of up to 350 tons weight. The machinery for handling the blocks, and the large diving bell for preparing the foundations, were all designed by Stoney.

In addition to harbour works, Stoney directed the design and rebuilding of two major bridges across the River Liffey, namely Grattan Bridge and O'Connell Bridge, and designed Beresford Bridge, a swing bridge formerly across the river near the Custom House.

Stoney was elected FRS in 1904, and in the same year received an honorary degree of LL.D. from the University of Dublin. He was elected a member of the Royal Irish Academy in 1857. He was President of the Institution of Civil Engineers in 1870.

On 7 October 1879, Stoney married Susannah Frances, daughter of John Francis Walker, a barrister, and had four children. Bindon Blood Stoney died in Dublin on 5 May 1909.